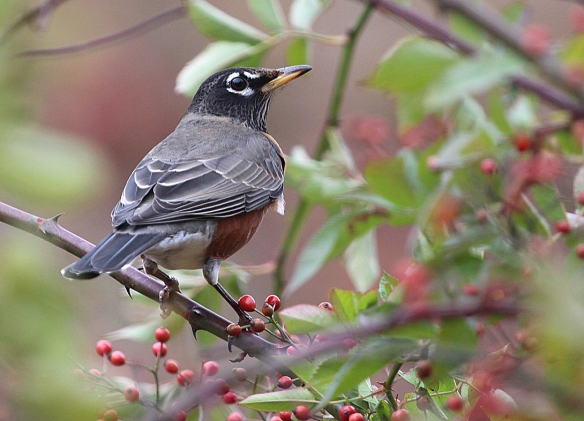 Catching up on some news from For the Birds readers.

Carol wrote in to share a story about a backyard spectacle she witnessed at her new home.

Her new place overlooks a pond surrounded by trees and from her living room window she peers down on two dogwood trees and an adjacent white pine. In early fall, the dogwoods were “both laden with berries,” she wrote.

One day she noticed movement between the pine and dogwoods and inspected the situation. She saw close to a dozen American Robins moving from tree to tree feasting on the berries.

“I usually see robins on the ground so this was a different perspective and quite a pleasure,” she wrote. “This kept up for a few days until every single one of those berries was gone.”

Carol said she was reluctant to share the news with me because it involved a common bird. I’m glad she did share it. I appreciate all birds and bird stories.

Speaking of those berries in Carol’s backyard, she noted that a lone Gray Catbird was the only other species that showed up for the feast. It’s always a thrill when you find birds eating berries of one sort or another. Thrushes can commonly be seen eating berries in the fall. You can also find vireos, warblers, and a variety of other birds picking off berries.

One of my favorite birds that commonly eats berries is the Cedar Waxwing. The magazine Birds & Blooms recently published a list of berries that are favored by waxwings. The list includes: winterberry; hawthorn; juniper; crabapple; mountain ash; elderberry; and serviceberry.

I’ve also heard from a few readers in places such as Marlow and Jaffrey who have seen Evening Grosbeaks at their feeders. I haven’t seen an Evening Grosbeak in years. It is more of a northern bird, but was once seen fairly often in middle and southern New England as well. Now, they are sporadic visitors to our parts. With the recent reports,I’ll certainly keep my eyes peeled.

Evening Grosbeaks somewhat resemble American Goldfinches, but only on steroids as it is larger and bulkier overall with a thick substantial bill, hence “grosbeak.” The yellow is not as vibrant as a goldfinch in breeding plumage. Let me know if they show up at your feeders.

On another, less rosy, note, I also heard from a reader who discovered a headless Dark-eyed Junco on top of one of her feeders. She wondered, and who could blame her, what would do such a thing.

The likely culprits are a cat or a bird of prey. Many cats kill birds and other small critters without any intention of eating them. Most cats don’t decapitate their prey, but they have been known to do so.

But, with the junco being found on top of a feeder, my guess would be either a hawk or owl was the culprit. They have also been known to decapitate birds without eating the rest.

So here’s my guess: A hawk, probably a Sharp-shinned but maybe a Cooper’s, caught the bird, flew to the feeder to eat it and was flushed by something before it could finish the meal. Just an educated guess.

Finally, to end on a brighter note, it is the time for giving so don’t forget bird and conservation groups when making your end-of-year, tax-deductible donations.

And, as always, send me your bird stories. I’d love to hear what you’re seeing out there.

3 thoughts on “Latest For the Birds column: Notes from New England readers”