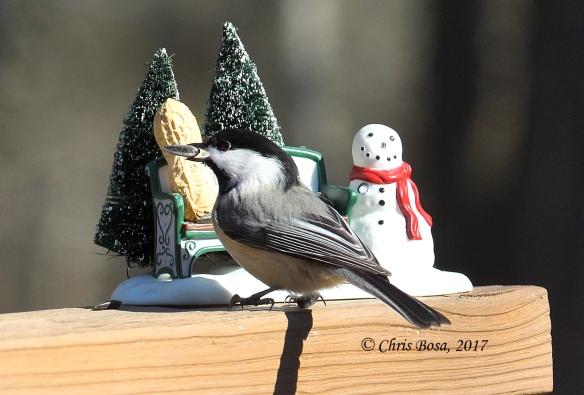 Chickadees are a beloved bird in New England and have always been plentiful, so a dearth of them reported by many people is cause for concern. Not necessarily alarm, but concern, for sure.

One possibility is that the chickadees in Canada that typically come down a bit south in the winter are finding enough food up north. Or, perhaps the opposite is true, and the chickadees that live in New Hampshire have left the state for the winter and flown south.

The organization also noted that natural food crops of berries, seeds, nuts and cones were strong this fall, potentially mitigating the need or desire to visit feeders. It did note that Christmas Bird Count numbers showed a typical amount of common feeder birds — except for chickadees. Christmas Birds Counts are held in December and data is typically available by mid to late January. Great Backyard Bird Count data should be available soon for analysis.

On the positive side, the New Hampshire Audubon noted that it does not know of any mortality event that would have impacted chickadees.

“Keep in mind that some birds we think of as year-round residents, including chickadees, blue jays, and house finch, migrate in some years,” New Hampshire Audubon noted. “Occasionally, they move south in response to food supplies or weather cues we can’t detect.”

Phil Brown of New Hampshire Audubon, and the compiler of the Keene Christmas Bird Count, noted that a research project is currently going on looking at chickadee numbers. Numbers are not available for that project yet either.

Hopefully, they just flew a bit south for the winter. With two nor’easters in March already and no significant warmup in sight, who could blame them?

4 thoughts on “Latest For the Birds column: Chickadees, scarce or not?”