Photo by Chris Bosak
Don Crockett of Project SNOWStorm talks about Snowy Owls at a presentation at Milford City Hall on Sunday, Jan. 25, 2015.

(Here’s a little something I wrote up about a presentation on Snowy Owls I attended on Sunday. The event “The Hidden Lives of Snowy Owls” was presented by Don Crockett and sponsored by Connecticut Audubon.)

Last winter Snowy Owls enthralled the U.S. Even casual birdwatchers couldn’t help but be caught up in the historic irruption of the beautiful, yet powerful Arctic bird of prey.

The birds made their way down from their Arctic breeding grounds in record numbers during the winter of 2013-14. Birdwatchers flocked to beaches to try to find the owls. Unlike most winters, the birdwatchers were often successful in catching a glimpse of an owl.

Photo by Chris Bosak
A Snowy Owl sits on a sign at The Coastal Center at Milford Point in early March 2014.

While Snowy Owls can remain in one spot for hours on end, they do move around quite a bit, during the day and night. So where do the owls go when they aren’t under the watchful eye of birdwatchers? What do they do at night when even the best spotting scope can’t keep track of their whereabouts?

Information about what Snowy Owls do when they come down to the United States is valuable because it gives us a better understanding of these mysterious birds. As Arctic breeders, the more we know about them the better as we continue to grapple with the effects of climate change. They may offer clues as to the extent to which climate change is impacting our world.

To help gather more information on these owls, a group of volunteers started Project SNOWstorm last year. The project involves trapping Snowy Owls with a net and attaching a transmitter to each owl’s back using a harness. The transmitter is lightweight (about 40 grams) and the harness is designed to not effect an owl’s flight. The transmitters are solar-powered, which reduces the weight as no batteries are required, and use the cellular phone network as opposed to satellites. Using the cellular network allows for more frequent (about every 30 seconds) and accurate data collection.

One of the “tech guys” involved with Project SNOWstorm is Connecticut resident Don Crockett, the developer of the Google Maps app that is used to track the owls.

On Sunday, Crockett spoke about Project SNOWstorm during the presentation “The Hidden Lives of Snowy Owls” at Milford City Hall. The event was sponsored by Connecticut Audubon. During his talk, Crockett used data from Project SNOWstorm to question a lot of conventional wisdom about Snowy Owls.

Many people think the Snowy Owls that showed up along the New England coast last winter were starving and incapable of hunting. Indeed, many that were brought to wild rehabilitators were emaciated and weak. But most of the owls caught for Project SNOWstorm were healthy and strong, Crockett said Sunday. The owls that were weak had suffered some sort of accident, Crockett said.

It is also believed that Snowy Owls come down to the U.S. in larger numbers in years when the lemming population crashes. That was not the case last year. In fact, an overabundance of lemmings may have spurred the historic irruption. In a breeding season with few lemmings around, adult Snowy Owls will not fledge many owlets. With an abundance of lemmings last summer in the Arctic, Snowy Owls raised many owlets. It was mostly these first-year owls that came down to the U.S.

To put last winter in perspective, Crockett showed a chart with the number of Snowy Owls found in the United States each year from 1930 to present. On average about 40 or 50 Snowy Owls are found each year. Last year 602 showed up in the U.S. The previous high was in 1973 when 256 were found. Twelve of those were found in Connecticut.

“It shows you what kind of event is was,” he said.

Project SNOWstorm tracked 22 of those owls. Data was collected on the day and night movements of the owls.

Snowy Owls, unlike many other owls, are believed to be diurnal, or mostly active in the day. Crockett said the data showed a lot of movement at night from the owls.

“If there is that much movement at night, how much do we really know about Snowy Owls?” he said.

Project SNOWstorm hopes to help answer many of these remaining questions. More information about the project may be found at http://www.projectsnowstorm.org

“Last year there was such a big influx of Snowy Owls and so many people came to see them at our Coastal Center — there was a great interest,” Tom Andersen, communications director at Connecticut Audubon said. “When I heard about Don and his presentation I thought: We have to do it. It gives people more information about something they are interested in.”

Connecticut Audubon President Alexander Brash spoke to the crowd of about 130 people before the introduction of Crockett.

“I know you’re here because you’re interested in birds,” he said. “That’s our mission, to use the charismatic nature of birds to be the leading conservation organization in the state.”

Photo by Chris Bosak
This chart shows the proliferation of Snowy Owls during the 2013-14 winter in the U.S. 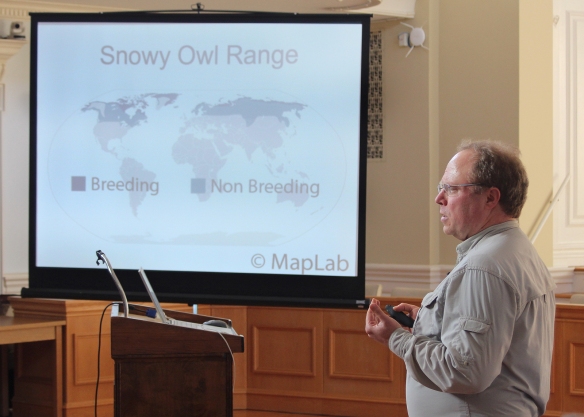 Photo by Chris Bosak
Don Crockett of Project SNOWStorm talks about Snowy Owls during a presentation at Milford City Hall on Sunday, Jan. 25, 2015.