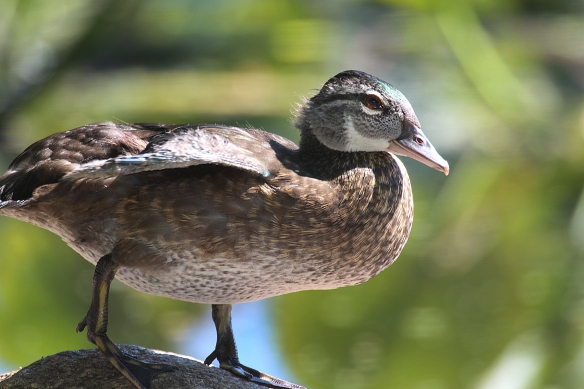 Photo by Chris Bosak
A young Wood Duck sits on a rock at Woods Pond in Norwalk, Conn., Julyh 2016.

I’ll kick off this bird column with a baseball reference. Why not?

A Major League manager once said, and I’m paraphrasing here, “These guys aren’t doing what their baseball cards say they can do.” He meant that he had a group of players who had had great seasons in the past, but were underperforming that particular year.

Well, the same can be said for birds in field guides. I have mentioned in previous columns that you can’t always trust field guides, just like you can’t always trust the statistics on the back of a baseball card. Some of the newer guides, such as the ones by Sibley and Crossley, are much more trustworthy. The Peterson guides, even the older ones, are pretty good, too.

The reason many field guides are not very trustworthy is that some birds are difficult to depict because they keep changing plumage.

Some birds are very easy to depict, either in photos or drawings. A Blue Jay looks the same whether it is a male or female, young or old, or seen in the summer or winter. Many of New England’s year-round birds are similar. Think of chickadees, titmice, and nuthatches.

Those birds are easy to show in a field guide. In fact, one photo will suffice, unless you want to show different angles.

But when you think of all the birds that call New England home, at least for part of the year, those “easy” birds are the exception not the rule.

Some birds only require two or three photos. Think of the beloved Northern Cardinal. You need a picture of the bright red male, the olive green female with the red/orange bill, and the olive green juvenile with a darker bill.

There are many other birds that fit into that category where there are only a few different plumages. In fact, those birds are probably the majority. Robins are another example. Males and females are a bit different from each other, and juveniles are unique as well. But they don’t significantly change plumage throughout the year.

Then you have the difficult birds. Some of these birds require a full page or two in a field guide to capture all of the different plumages.

It is easy to show pictures of the colorful adult male and the not-so-colorful female, but that only tells a small portion of the Wood Duck story. Big deal, you might think. The Wood Duck is rarely seen during its molt anyway, so why bother including the pictures? Well, if you are not familiar with that plumage and you happen to see a Wood Duck during that time, you want to look at a field guide and find what you just saw. There are few things in birding more frustrating than having a clear image in your mind, or even a decent photo of a bird, and not be able to identify it.

The Wood Duck is an extreme example. There are plenty of other good examples to go around. Take the warbler family. Most of our warblers differ in plumage depending on sex, time of year, and even age. There are entire books dedicated to the various warbler plumages. A simple field guide cannot do these little birds justice.

Keep these differences in mind as we head toward the fall migration. I know it’s still summer according to the calendar, but the fall migration has already started. It will gain steam as we head into September and October. So don’t look for the brilliantly colored tanagers or warblers as the leaves start changing colors, too. Most of the birds will appear more dull in the fall.

Get a good field guide and you should be OK. If you come across something you don’t recognize, feel free to send me a photo or description and I’ll do my best to figure it out.

For the Birds runs Thursdays in The Hour. Chris Bosak may be reached at bozclark@earthlink.net. Visit his website at http://www.birdsofnewengland.com