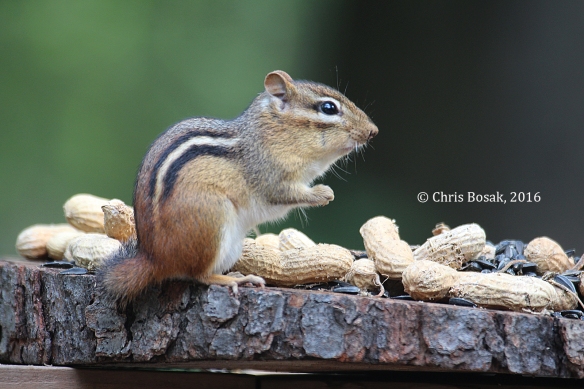 People don’t feel the same way about chipmunks as they do gray squirrels.

Keeping squirrels away from birdfeeders is a multi-million dollar industry. People can’t stand the sight of a squirrel at their birdfeeder. If they don’t have a squirrel-proof feeder (half of which don’t work anyway) they bang on a window, yell at the offensive little rodent, and toss things at them to make them scram. (Of course, I’m talking in general here. Some people don’t mind squirrels and some people actually like them.)

But chipmunks. Everyone loves chipmunks. They are cute, handsomely colored and decorated, and fun to watch. And, as far as I can tell, eat just as much of my birdseed as the squirrels do. They are onstant visitors to the platform feeder I have on my deck. But no one seems to mind when chipmunks take seeds.

If they weren’t so cute and handsome I have no doubt that people would think the same way about chipmunks as they do about squirrels. Imagine if chipmunks were all dark gray with no stripes. No one would welcome them into their yard. There would be a multi-million dollar industry selling chipmunk traps and chipmunk poison.

But they are cute, so no one really minds when chipmunks by the dozen take over a backyard.

I feel the same way about ladybugs. When a ladybug lands on someone’s arm, they say: “Oh look, a ladybug. Look how cute!” and then they give it a nudge with their fingers to shoo it away gently. If a similar sized, all black beetle landed on that same arm, the response would be: “Ahhh. Get it off!” and the bug would be brushed harshly to the ground with the side of the hand. Then probably stepped on.

Colorful moths are oohh’d and aahh’d over, while bland moths are smashed against the side of the house under the porch light.

I’m sure there are plenty of other examples out there. Leave a comment and let me know yours.