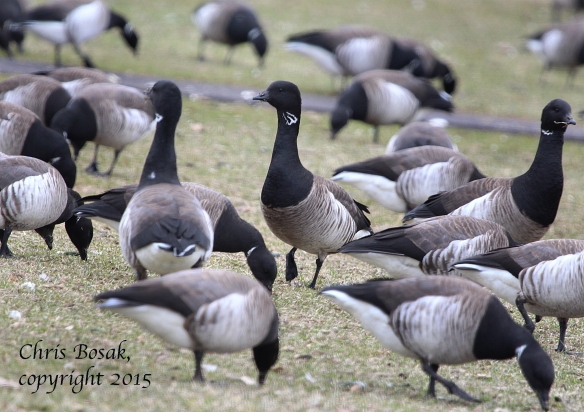 Photo by Chris Bosak
Brant were once again numerous at Calf Pasture Beach in Norwalk, Conn., during the 2016 Christmas Bird Count.

Norwalk Harbor, Norwalk River, Long Island Sound off Calf Pasture and Cedar Point Yacht Club, the small pond at Taylor Farm … it seemed the bufflehead was the duck of the day for the most recent Christmas Bird Count. As I have for the past 16 years or so, I participated in the Westport Circle count and covered East Norwalk with Frank Mantlik.

The Christmas Bird Count is the world’s largest citizen science program, with data going back to 1900. The data helps scientists track bird populations and is valuable in determining what steps, if any, need to be taken to help certain species.

Frank and I found a total of 53 species, which is about typical for us. The weather was wet and gray, so that may account for the slightly lower total. I can’t complain, though; the forecast called for heavy rains throughout most of the day and, other than one quick shower early in the morning, the rains held off.

Other than the Bufflehead being omnipresent, there were plenty of other highlights. Bufflehead, by the way, are small ducks found on fresh and saltwater. Other duck highlights were big numbers of long-tailed ducks, green-winged teal near 14 Acre Pond, wood ducks near 14 Acre Pond, Northern Shovelers on the Norwalk River and Long Island Sound and plenty of hooded mergansers at several spots.

Sticking to the water, there were also big numbers of Atlantic brant, as usual, as well as common loons and red-throated loons.

Once we ventured away from the water and to spots such as Taylor Farm we found plenty of songbirds. Some of the highlights were ruby-crowned kinglet, northern flicker, American pipit, fox sparrow and eastern towhee.

We didn’t see any warbler species this year. Warblers, neo-tropical songbirds that have long since migrated south, are a surprise rather than the norm for New England Bird Counts, but we typically find a species or two each year.

About 40 people participated in the Westport Circle Count, each covering their own territory. A boat crew once again scoured Long Island Sound and the Norwalk Islands. In all, about 115 species were found, including the long-eared owl, northern gannet, cackling goose, rough-legged hawk and red-headed woodpecker.

Once again, Towney and Mardi Dickinson were the compilers for the count.

I was hoping one of the teams would find an evening grosbeak, a once-common yellow, black and white bird that has become a rare sight throughout most of New England. But no luck.

I won’t harp on that one miss, however. Instead, I’ll celebrate the 115 birds we did find.