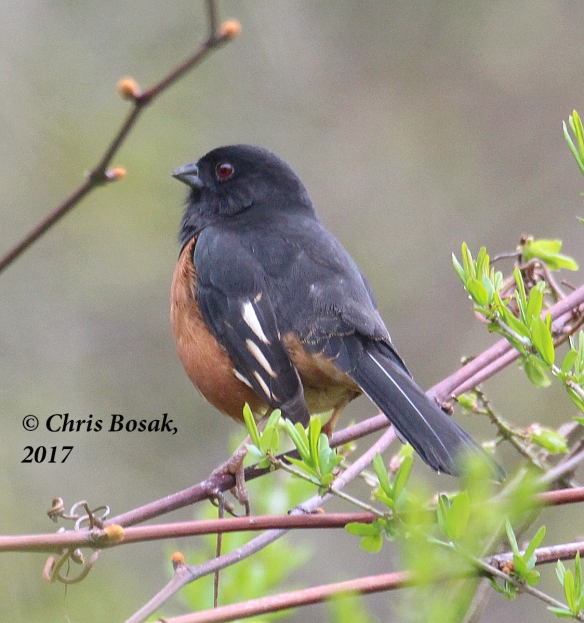 Photo by Chris Bosak
An Eastern Towhee perches on a branch in Ridgefield, Conn., April 2017.

I was on a tight schedule so I planned a quick out-and-back bird walk, instead of trying to tackle the entire several-mile loop.

The entire walk on the “out” portion was quiet with not a single bird seen or heard. I found that very peculiar considering it was the middle of April when the spring migration should be heating up. No warblers, no vireos, no regular birds. It was a drizzly day, so perhaps that had something to do with keeping the birds hunkered down.

Then, deep in the woods, I heard a familiar call. It was a sharp and fairly loud two-syllable call. It was an eastern towhee. Based on where the sound was coming from, there was no way I was going to find it. I could have tromped through the brush and woods, but I didn’t want to risk being covered in ticks. It’s early spring, and I’ve already found several ticks on my clothes and a few attached to my body. In fact, that started back in February.

I’ve heard from several sources that the conditions are right for a bad tick season, so be careful out there. Check your clothes and self frequently.

It turned out it was no big deal that the towhee alluded me as several other towhees made their presence known as I made my way back. These towhees were much closer and some were even cooperative for the camera. From my experiences, that is pretty rare for a towhee — although the breeding season makes birds, and other creatures, do strange things sometimes.

By the end of the walk, I had seen about eight towhees. Only one of the birds was a female, and she stayed out of range of the camera. I did bring her in with my binoculars and got good looks at her. A male was close by, singing and calling. It was likely her mate.

Like many species, eastern towhees are sexually dimorphic, meaning males and females differ in appearance. But unlike many bird species, female towhees, in my opinion, are just as handsome as the males.

While the males are decorated with black, reddish-brown and white plumage, the females are light brown and white. Both have a similar pattern with white bellies and rufous-colored flanks. The males also have red eyes, which I always find cool.

As I mentioned before, time was short on my walk but the towhee sightings extended the walk — I’ve never been one to leave cooperative birds because of being in a rush. Two towhees in particular were cooperative and allowed me to grab some shots of them. Neither was overly cooperative, but each offered a few seconds worth of perching on an obvious, unobstructed branch. Towhees are infamous for hiding among the thick brush.

The walk ended void of any other bird sightings. No warblers, no vireos, no tanagers or grosbeaks. Just towhees. I’ll try again on a sunnier day.

2 thoughts on “For the Birds: Towhees aplenty on walk”