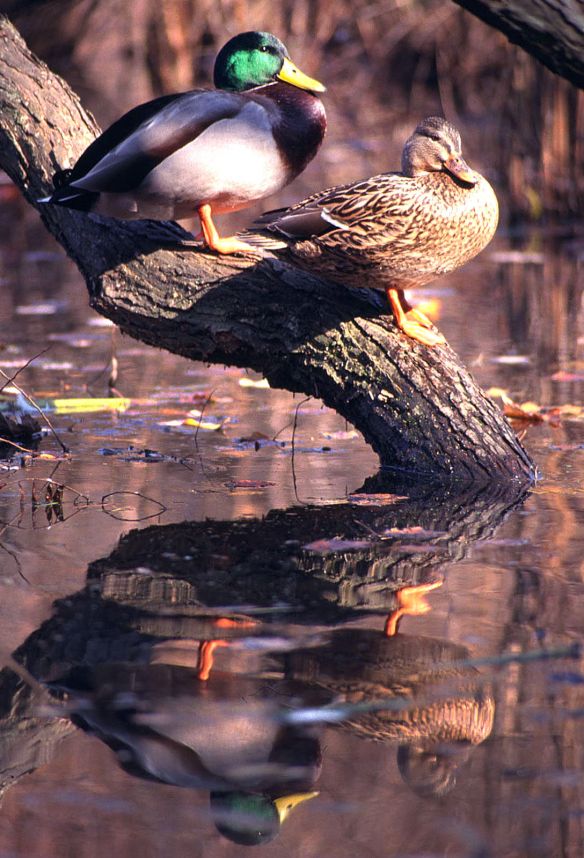 Mallards sit on a branch overhanging a pond in New England. Photo by Chris Bosak

For just a moment, I was in their world.

As I stood there I could see nothing but branches, sticks and stubborn brown leaves that refused to fall off the low trees. Then I crouched like a baseball catcher and there they were: a flock of mallards taking a mid-day break in the tangled trees growing out of a small pond.

Normally mallards would not make for a memorable birdwatching outing, but this time was different.

A fairly busy road was no more than 50 yards away, and my car was about 50 feet away, but I felt as if I was visiting the ducks’ world. The area was thickly wooded and a dark canopy of towering branches hung over the pond’s edge, adding to the feeling of seclusion. It was as if the world was reduced to the woods, the mallards and me.

It was a neat sensation, one that I’ve experience only a handful of times before — usually in extreme northern New Hampshire.

It was the way the mallards acted. They didn’t flee when my feet crunched the crispy leaves as I approached. They didn’t plop into the water and swim away slowly when I crouched for my view. They stirred only slightly as I settled in for a closer look and found a more comfortable position. (The catcher’s stance lasts only so long these days for me.) Most importantly, the mallards didn’t approach me looking for a handout. That definitely would have ruined it.

I watched as the mallards simply went about their day. The average person would have been bored silly in about 30 seconds, but I was fascinated.

A drake had the best seat in the house, hogging a gnarled tree all to himself. Just off to the right was a leaning tree with half a dozen mallards sitting next to each other. Four of them were sleeping, heads turned around with their bills nestled into their backs — eyes closed. The two wakeful mallards paid no attention to me. At least eight other mallards occupied trees or branches in the same area.

Another drake swam onto the scene. It bypassed the crowded leaning tree and tried to join the male that was sitting alone. Big mistake. The duck leaned forward, hissed and snapped at the newcomer, shooing him away. It found a place nearby to roost.

A minute or two later, one of the hens left the crowded tree, took a few graceful paddles through the shallow water and climbed aboard the gnarled tree with the ornery male. The male shifted slightly, but let the hen stay. After about three minutes, the drake’s charitable mood changed and he nipped at the female, sending her away.

The mallards’ mid-afternoon break outlasted mine. I was already late for work and, knowing that, the feeling of being in a different world faded away.

It was back to the real world. But I had the dirty pants and muddy shoes to prove that I had been elsewhere.

5 thoughts on “For the Birds: In the world of mallards”