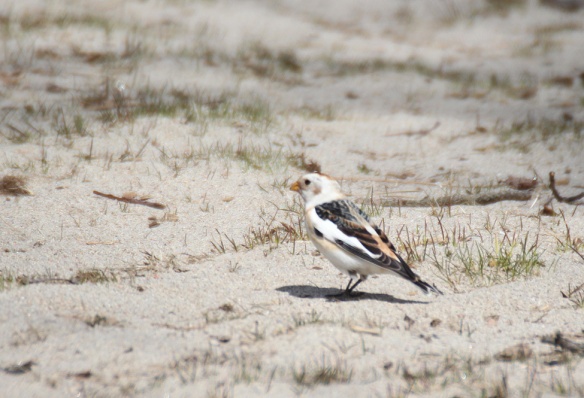 I had two very different birdwatching experiences on consecutive days recently. Both of them were great, of course, but very, very different.

Let’s start with a Wednesday outing. I had some rare time to myself, so I was going somewhere. I didn’t care how cold it was outside, I was getting out of the house.

I had read the previous day on the Connecticut Rare Bird Alert Web site that short-eared owls were being seen at Silver Sands State Park in Milford. I’ve never had much luck finding owls, but figured I’d give it a shot. Maybe this was the day my luck would change. Snowy owls are being seen in larger-than-normal numbers this year, too, so my chances were doubled.

Armed with a heavy winter coat, hat and oversized dorky mittens, I braved the single-digit temperatures and headed to the coastal park. I closed the car door behind me, took about three steps toward the sand and was harshly reminded that weather conditions are usually worse along the shore — especially in the winter.

The ambient temperature was nine degrees. The wind chill at the beach, factoring in the heavy gusts blowing off the partially frozen Long Island Sound, was just plain ridiculous. The sand did not blow, however. It was frozen solid like a huge, flat rock.

I eventually turned away from the beach and walked along a boardwalk that spanned a frozen marsh and ended at an open field. The marsh yielded nothing in terms of bird sightings, although I did hear starlings somewhere off in the distance.

At the field, however, I noticed two birds flying away that were obviously not your common sparrows or starlings. Seeing their landing spot, I pulled off my bulky mittens and trained my binoculars. Eastern meadowlarks. Nice sighting, I thought, and continued on my way.

I walked the field for another 10 minutes when I stopped to inspect a row of tall grasses for sparrows. Knowing the sneaky birds were in there, I went mitten-less again and lifted the binoculars.

My frustration was nearing its peak at not being able to find the little brown birds. My face was too numb to try to “pish” them out. Things looked bleak on this bitterly cold day. Maybe I’ll try to find the meadowlarks again for a quick shot of inspiration.

Then I noticed a shadow quickly moving along the ground. I lifted my head just in time to see a short-eared owl fly over the field and toward the beach. I followed the owl with my eyes for as long as I could, but it eventually blended with the dozens of gulls flying around the beach.

I never got a great look at it and the look I did get was fleeting, but I was happy to see it just the same. In my eternal optimism, I headed toward the beach to try to find it.

Once I got to the beach I remembered why I turned away from it in the first place. Cold and windy doesn’t even begin to describe it. But I was now on a mission so the elements didn’t matter.

I walked the beach for a good long way and saw nothing. Gulls, mallards, black ducks and a few flocks of diving ducks in the distance, but nothing else and certainly no short-eared owl.

The problem with walking a good long way along the beach is that you have to turn around and go a good long way back. In the summer, that’s the good thing about a long walk on the beach. In the winter, not so much. The car, or even the park, was nowhere in sight. I had a miserable several minutes ahead of me — but some good birdwatching memories already behind me.

I woke up Thursday and discovered that it hurt to make a fist. I looked at the back of my right hand — my binocular focusing hand — and noticed it was dark pink, cracked and even speckled with blood at the knuckles. My left hand fared better and was merely dark pink.

With my hands serving as a red badge of stupidity, I shifted gears for this day’s birdwatching moments. I watched the feeders from the comfort of my home.

I saw more variety and had closer looks of the birds than the previous day at the beach. I had just deposited my Christmas tree in the side yard and dozens of juncos were already taking advantage of the shelter. In all, there must have been 50 juncos in the yard.

The juncos were outnumbered only by the crows that stopped by for a visit right before sunset. The oaks on my property were covered with crows and the spill-over black birds crowded on the smaller trees in the front yard. The activity and noise was intense, but short-lived. Before darkness completely set in, the crows — there were at least 200 — took off as one massive flock.

It was a fittingly spectacular finish to a great couple days of birdwatching.

One day challenged me physically and mentally. The other day couldn’t have been more comfortable. Yes, there are as many ways to enjoy this great hobby as there are magnificent species to see. Take your pick.