I heard what I was pretty sure was a scarlet tanager high in one of my oak trees. The thick foliage makes it nearly impossible to find anything up there. Even a brilliantly bright red bird like a scarlet tanager could easily be hidden from view. 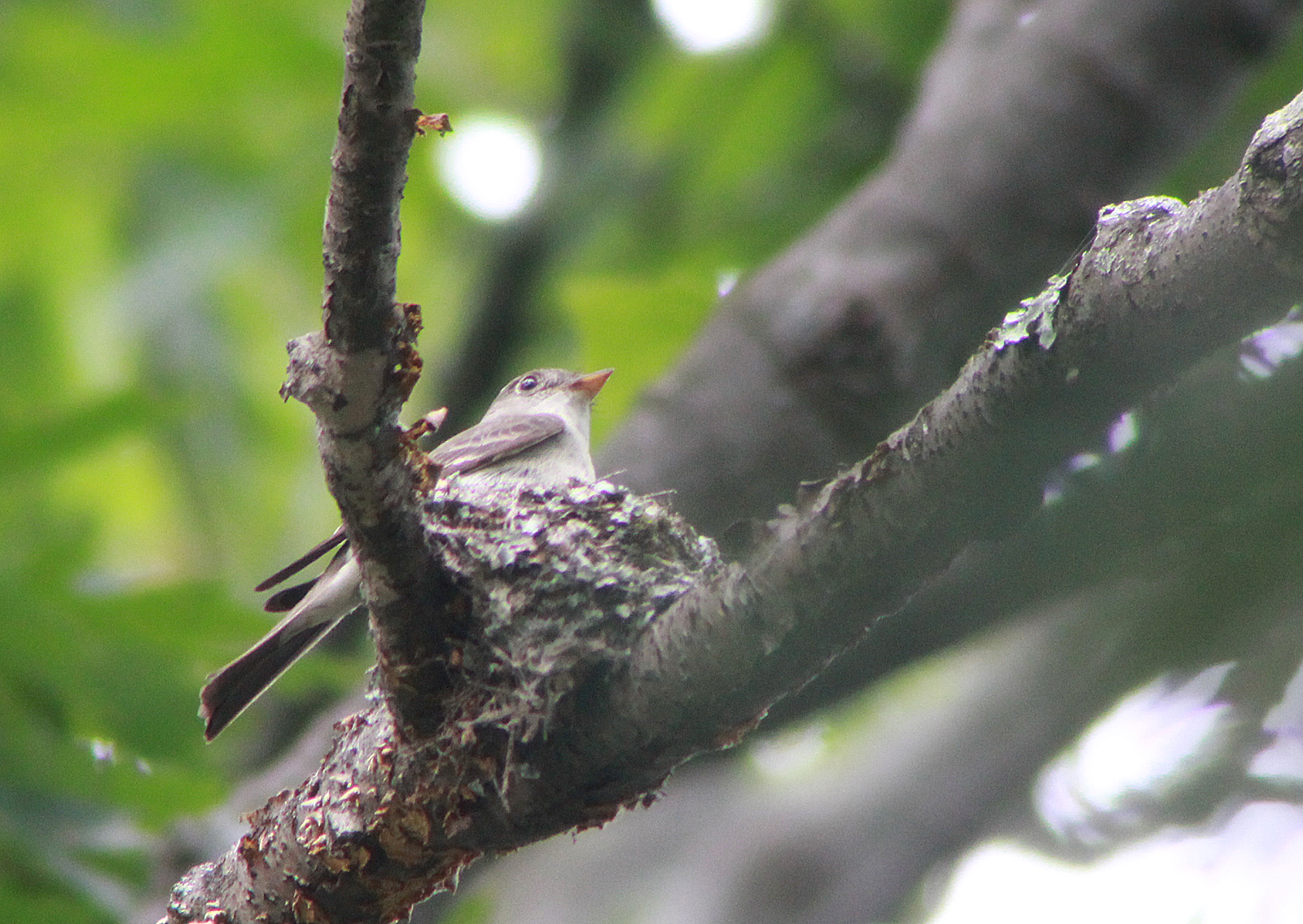 I looked with my naked eye for several minutes, hoping to spot some motion to give away the bird’s location and identity. To my frustration, I couldn’t find a thing, even though I knew right where the song was coming from.

So, I figured I’d try scanning the area with my binoculars with the hopes of catching a glimpse of some bright red among the dark green leaves. Picking out a bird among thickly leafed-out treetops is usually a lesson in futility and humility.

But not this time.

No, I didn’t find a scarlet tanager. I did, however, find the active nest of an eastern wood-pewee. Somehow, my binoculars trained themselves right on the spot. The small, cupped nest is built in the Y of a dead branch sticking out among the impenetrable foliage, about 40 feet high.

I watched the mother pewee for a few minutes before she flew off into the woods. I noticed a bright orange object in the nest. I assumed it was a mushroom of some sort because the dead branch is covered in a white fungus. With my binoculars, however, I discovered it was the mouth of a baby bird waiting to be fed.

Sure enough, about two minutes later the mother bird returned and a few other orange “mushrooms” appeared.

It was the first time I had ever found an active eastern wood-pewee nest and I found it by accident. I love those types of accidental discoveries.

It was also good fodder for my Connecticut Breeding Bird Atlas volunteer duties. The three-year study of breeding birds in the state requires high-level breeding codes in order to confirm breeding status. This breeding code was “feeding young at nest,” a slam dunk.

The breeding season, believe it or not, is already starting to wind down. Most birds have fledged young already or will soon. Many birds are on to second or third broods. A few birds, notably the American goldfinch, get a later start than most birds.

Now is also the time to pick off a lot of species for the breeding bird survey. The awesome warblers I saw in May mean little or nothing for the survey as most of those colorful birds were just passing by on their way to their breeding grounds.

What volunteers are looking for is hard evidence of breeding: active nests, young birds and adult birds carrying food, for example. Another highlight for me this summer was seeing an adult male rose-breasted grosbeak feeding a youngster. I also found the hollowed-out nests of both downy and hairy woodpeckers.

Birdwatching in the summer can be rather slow as many birds are busy raising young and staying out of view. But watching for breeding activity adds an element of excitement to birding in June and July.