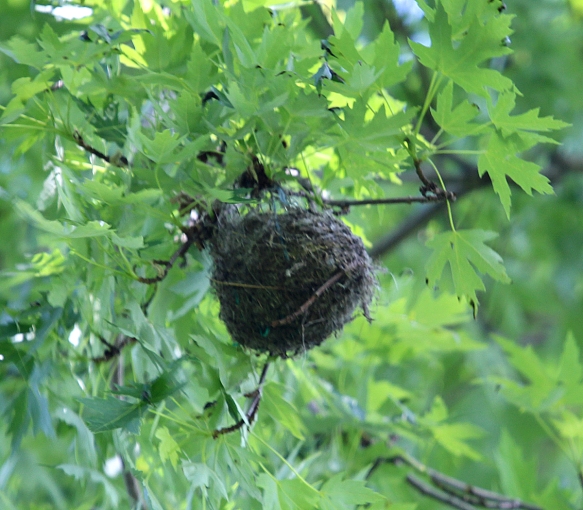 Photo by Chris Bosak
A Baltimore Oriole nest in Stamford, Conn., May 2015.

I took a walk around a local park in Stamford, Conn., yesterday. I knew the warbler migration was winding down, but I figured I’d see a few late migrants and perhaps something else interesting. Something always happens when you make the effort to take a walk in the woods.

I was walking happily along looking up in the trees for movement. With the leaves out now, movement is the only way to spot most birds. I glanced down and suddenly found myself tip-toeing frantically to avoid bird droppings all over the trail. Not that it would have been a big deal if I stepped on one, but my brain recognized it as something out of the ordinary and sent signals to my feet to avoid it.

I kept walking a few feet until my brain finally figured out something else. Hmm, a bunch of bird poop concentrated in one area, especially with some of the droppings still wet. Worth checking out. Looking for bird poop (white wash) under trees is a good way to find owl 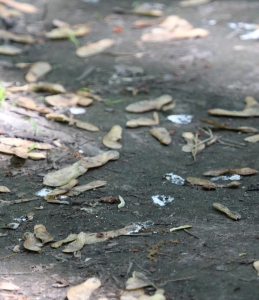 Photo by Chris Bosak
The giveaway. Baltimore Oriole droppings on a trail below the birds’ nest.

roosts, but can also mean any number of other things. Sure enough, it was something interesting. A Baltimore Oriole nest hung from a branch right above the trail. It was built high, but directly above the trail.

An oriole nest is really something to behold. It’s like a woven basket hanging from a branch. It looks as if it will blow down in any stiff breeze, but they are remarkably sturdy. In November, when all of the leaves have fallen, I’m amazed to see where Baltimore Oriole had nested and how the nests withstood some of the summer storms.

I didn’t see the orioles in the nest, but judging from the freshness of the 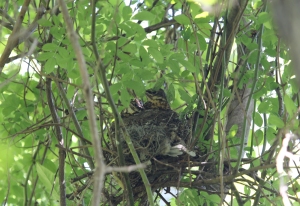 Photo by Chris Bosak
An American Robin’s nest with young birds in it, Stamford, Conn., May 2015.

droppings, it was active. Nice way to start the hike, I thought. Then as I was about to continue on my way, I noticed a flash of a bird landing the thick brush. I put my Eagle Optics binoculars to face and looked into the nest of an American Robin. The flash I noticed was the female bringing food back to the youngsters. From the looks of it, the youngsters are quite large already and should be fledging before too long. I

I was two minutes into my walk and, even though I hadn’t seen many birds yet, it was already an interesting bird walk. As I went about my walk I paid particular attention to bird homes. I noticed a Tree Swallow in a bird house box, Purple Martins in their gourd colony and a Mute Swan on the ground by a body of water.

The bird nests were so different from each other yet so effective in their own ways for their particular species. Although many birds, especially birds of prey, started the nesting process long ago, the nesting season is just starting for other birds and will continue for several weeks. Keep an eye out for something new and interesting on your next walk in the woods. 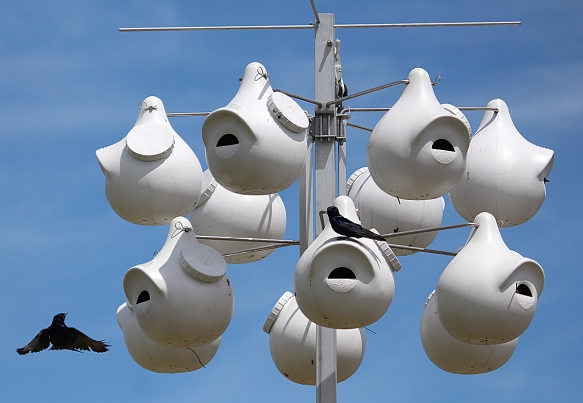 Photo by Chris Bosak
Purple Martins at their colony at Cove Island Park in Stamford, Conn., May 2015.