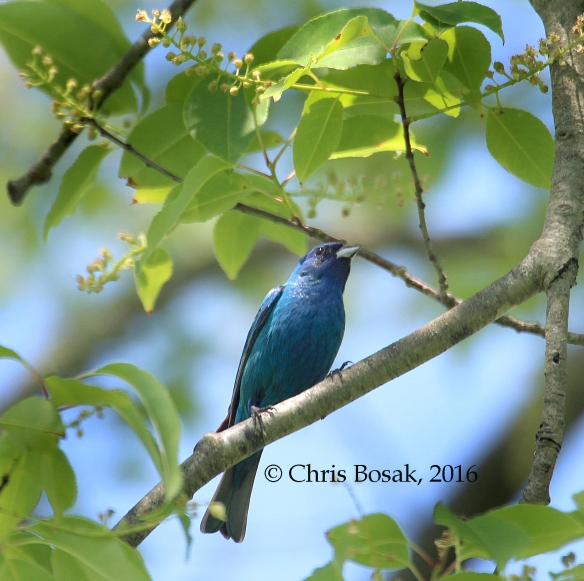 Photo by Chris Bosak
An Indigo Bunting perches in a tree in Ridgefield, Conn., spring 2016.

Did I make these sightings happen? Probably not, but it was pretty strange nonetheless.

I was checking out a new birding spot, Bennett Pond State Park in Ridgefield, that a few people had told me about. They told me about the pond, which had beaver and Wood Ducks, and told me how to get there. To paraphrase, they said: “Walk to the field, into the woods and you’ll get to the pond.”

I love ponds. They are perhaps my favorite habitat to explore, especially if there are swamps nearby, too. But the word that really stuck out to me was “field.” I know where plenty of ponds are, but fields are becoming a scarce resource these days. Just ask all of the bird species that are in peril because they rely on fields.

Of course I took the wrong trail to get to the pond. I read the trail map wrong (what else is new?) and ended up taking a very wooded trail. The trail was pleasant enough and I heard some good birds — Ovenbird, Veery, Wood Thrush, Worm-eating Warbler — but it wasn’t the field habitat I was looking forward to so much.

I got to the pond and it was much larger than I had expected. And, yes, there were swampy areas nearby, too. I noticed a female Wood Duck leading her brood to the other side of the pond. She must have heard me coming through the woods. I snapped a distant photo and later counted she had 14 babies with her.

I glanced at a beaver den that was surprisingly close to the shore and noticed that, even more surprisingly, there was a beaver out of the water sitting on the edge of the den. It eventually ducked into the water and I moved in for a closer look. It resurfaced a short while later and looked like a floating log by the den. I sat down on a rock at the pond’s edge and heard a giant “splash!” When beavers want to warn other of their kind about a potential threat, they dive under water and slap their large, flat tail on the water surface. It’s louder and makes a bigger splash than any cannonball dive I’ve ever seen.

All right, I said to myself, the beaver is not comfortable with me here. I’ll move on.

Instead of backtracking on the trail and taking the same wooded trail back to the car, I kept walking along the trail with the assumption that it would eventually lead me to that field.

The trail continued along the pond for a while and revealed several more beaver dens. Then the trail headed back into the woods. This side of the trail was much more hilly and I was thankful for the workout it was giving me. It’s nice to breath heavily once in a while. But the woods seemed unrelenting. My faith that the field was just ahead finally paid off. I emerged from the woods and stood at the edge of a large field with about half a dozen large trees scattered throughout.

I stood there for a few seconds listening for bird songs. Nothing. I walked about halfway along the trail that skirted the edge of the field. Nothing. I noticed a small trail bisecting the field so, of course, I took it. When have I not taken a little-used small trail? Still no birds. Not a sighting, not a song. I guessed I had spent too much time in the woods and at the pond and missed the morning bird rush. It was approaching 10 o’clock at this point.

Oh well, at least now I know where the field is and can find it more quickly next time.

As I walked back along that bisecting trail something clicked in my head: This is prime habitat for Indigo Buntings. Once that thought entered my head I couldn’t believe I hadn’t seen one yet. This field is perfect for them.

Then, as it often happens in the natural world, without notice things started happening all around me.

A flash of blue darted across the field from one of the trees to another. Indigo Bunting! I knew it. It was a quick sighting, but I was happy for it.

As I continued along the main trail a gorgeous bird flew from a shrubby area and into the nearby woods. I knew from the wing and tail markings that it was a male Eastern Towhee. He looked at me from a low branch when suddenly his female counterpart flushed from the same area and perched in an adjacent tree. Thinking I may have disturbed their nest, I briskly walked away. Trying to get photos didn’t seem worth it. I was happy enough just to have seen the happy towhee couple.

As I continued down the trail I heard the familiar song of the Indigo Bunting. It’s not the most impressive song out there, but it’s sweet enough. The source of this song was perched right above my head. Then another male Indigo Bunting came charging across the field to chase away my songster. Two beautiful birds chased each other around the field for what seemed like minutes. It was really about only five seconds. Off and on as I lingered in the field three Indigo Buntings jockeyed back and forth among the high grass and low shrubs. It was interesting to see just how much the sun impacts the colors we see on the Indigo Bunting. Depending on where the bird was and how the sun hit it, the plumage was either jet black, electric blue or somewhere in between.

Of course, I never tire of seeing Indigo Buntings, but another thought jumped into my head. Hey, this is also good habitat for Blue-winged Warblers. I wrote about Blue-winged Warblers in this column a few weeks ago. They are beautiful yellow birds with a long, black eye stripe and unique insect-like song.

Sure enough, as soon as that thought entered my head, I heard that buzzy song from across the field. Then two of the small, but impressive birds appeared in the shrubby growth. At least that’s how I remember it. Perhaps I heard the song and that’s what made me think about it, but at any rate, yes, Blue-winged Warblers were around, too.

The field also eventually yielded sightings of Wild Turkey, Black-billed Cuckoo and Common Yellowthroat. I even heard a Barred Owl calling from the nearby woods.

When I got home later that day another thought crept into my mind: That’s great habitat for Bobolinks, too. Darn, I scolded myself, I should have thought about that when I was in the field. Maybe one or two would have materialized.

For the Birds runs Thursdays in The Hour. Chris Bosak can be reached at bozclark@earthlink.net or via his website www.birdsofnewengland.com

Photo by Chris Bosak
An Indigo Bunting sings from a perch in Ridgefield, Conn., spring 2016.

1 thought on “Latest For the Birds column: I knew there had to be Indigo Buntings there”