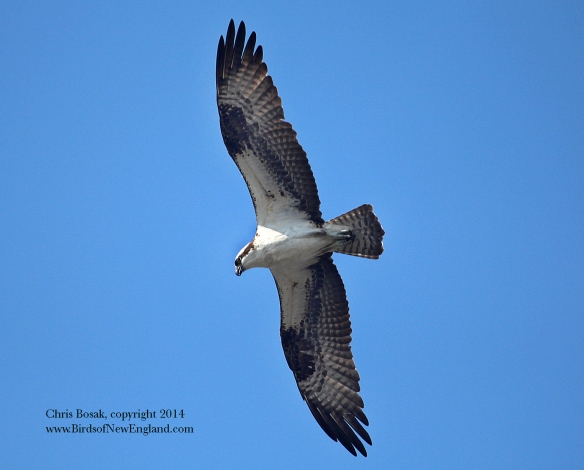 Photo by Chris Bosak
An Osprey soars over the Norwalk River on Monday, Sept. 1, 2014.

A September would not be complete without a bird column on the fall hawk migration. For many, the hawk migration is the highlight of the fall season, despite there being many other birding options this time of year.
It’s hard to blame those people who feel that way. You can’t complain about spending a sunny, crisp fall day on the top of a mountain or other open area looking for hawks coming down from the north. Pick the right day and you may see hundreds of hawks making their way to their winter grounds.
The trick for many people, including myself, is figuring out which hawk is which from such a distance in the sky. I have gotten better over the years but certainly not to the level of the experts at the popular hawkwatching sites throughout New England. The experts, who are trained in this sort of thing, know the identification of the bird long before I can even see it out in the horizon.

The other trick to hawkwatching is picking the right day. Weather plays a big role in the fall hawk migration. Pick a day with a steady southerly wind and you’ll likely see very few hawks. Which hawk wants to battle a stiff headwind to start a thousand-mile (or more) journey.

But, pick a sunny day following a cold front with a northerly (or northeast or northwest) wind and you could be in for a banner hawkwatching day. In mid-September, upwards of a thousand Broad-winged Hawks may be seen in a single day.

Speaking of Broad-winged Hawks, they are one of the most prominent and early hawks seen in New England with their number peaking around the middle of September. Osprey are also prominent in September, but several “fish hawks” remain with us well into October.

American Kestrels, Sharp-shinned Hawks and Peregrine Falcons are seen frequently in late September into early October. By the time the middle of October rolls around, birds such as Red-tailed Hawks, Turkey Vultures and Merlins are the more commonly seen hawks. Bald Eagles are seen usually in late October and into November. As you’ve figured out by now “hawkwatch” doesn’t mean only hawks. It also includes falcons, eagles, vultures and Ospreys.

The above information, of course, is merely a generalization. Individuals of each of the species can fly over New England earlier or later than the rest of their kin. The important thing to know is that anytime between early September and the middle of November can yield a good hawk movement. In general, mid-September to mid-October is the best time to go – again, keeping in mind the weather conditions.

There are good hawkwatching spots throughout New England. Pack Monadnock at Miller State Park in Peterborough is an excellent place to go on a hawkwatch. Pack Monadnock will likely have an expert on hand. The experts are there to identify, count and record the hawks they see, but they also serve as ambassadors for birding and are more than willing to answer questions anyone may have.

A few quick identification tips as you venture out to a hawkwatch. Firstly, the hawks are flying overhead. They aren’t perched in branches or wires giving you good, long looks. So you need to be able to identify them by shape and movement. You generally aren’t going to get a good look at its back and head plumage. Wing beat pattern often doesn’t come into play as the hawks prefer to ride thermals instead of using energy to flap their wings.

The edges of the wings feature “fingers,” which are also used for identification purposes. Some birds have long fingers and some birds have short fingers. Vultures and eagles typically have longer fingers and the accipiters (sharp-shinned and Cooper’s) have shorter fingers. The Peregrine Falcon often flies in such a way that the fingers aren’t shown.

There’s a lot to learn about hawkwatching, but it’s a fascinating part of birding. My advice is to visit a hawkwatching site on a sunny day (preferably with northerly winds) and sit as close as to the on-site expert and soak in the knowledge.

1 thought on “Latest For the Birds column: Hawkwatching primer”