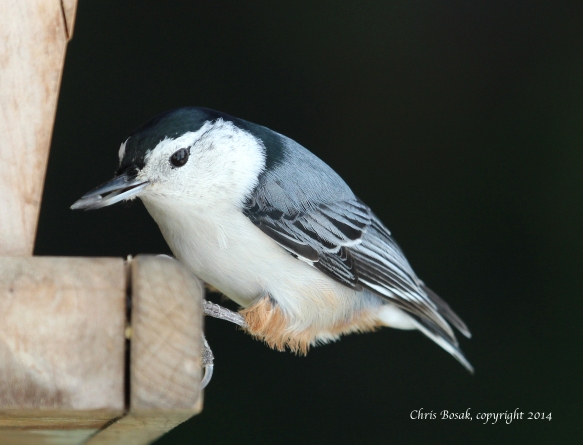 The feeders went back up a few weeks ago. Nothing extraordinary has shown up yet, but it sure is nice to see the “regular” birds back.

My constant companions are nuthatches, titmice and chickadees. There is usually a downy woodpecker or two there as well, but they are not as reliable as the aforementioned birds.

I love seeing the nuthatches. I love the titmice and chickadees, too, of course, but I have an affinity for nuthatches. None of the previous places I’ve lived attracted nuthatches in big numbers. They were always there, but in small numbers as one or two at a time would show up.

Now I have nuthatches all over. It’s not uncommon to see six or seven at a time. One or two will be on the feeder hanging from the pole, one will be at the platform feeder on my deck railing and three or four will be in nearby trees waiting their turn. The ones in the trees won’t have to wait long as nuthatches feed by taking a seed and flying off to eat or stash the seed for late. They don’t sit on the feeder’s perch and stay there eating seed after seed like cardinals, sparrows, finches and other birds.

Of those multiple nuthatches, one or two will be uttering the ubiquitous “yank, yank” call of the nuthatch. It’s such an odd sound to come from a bird, but a welcomed sound nonetheless.

White-breasted Nuthatches are also attracted to suet, peanuts and just about anything else you may offer. Titmice, chickadees and Downy Woodpeckers are similar in that regard.

On my camping trips to northern New England I find that the Red-breasted Nuthatch is the dominant nuthatch. Somewhere as you head south in the region, the nuthatch distribution switches over to White-breasted Nuthatches.

So keep your eyes on your feeders this fall and winter. I’m sure White-breasted Nuthatches will be around. Perhaps the red-breasted variety will show up, too.

Fall is an interesting time at the feeders. The “regulars” show up, but it’s also a period of migration. It was about this time last year when a group of Pine Warblers began to visit my feeders. Warblers rarely visit feeders and only a few species are known to, but fall is a time when you may see them. Be sure to have your feeders fully stocked.

Also keep your eyes on the trees, bushes and dying flowers in your backyard. During migration, you never know what will show up. I know I’m looking forward to seeing kinglets, which are a good, reliable fall arrival to yards throughout New England.

As always, feel free to drop me a line to let me know what you’re seeing out there.