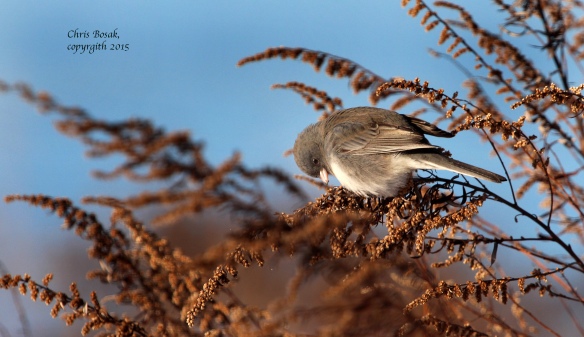 Photo by Chris Bosak
A junco looks for seeds on a dried up plant at Weed Beach in Darien, Conn., in Jan. 2015.

I was wondering when the first one would show up. Mid to late October is typically when the Dark-eyed Juncos start showing up throughout the southern half of New England, but I hadn’t seen one yet and October was quickly fading away.

Eventually I noticed something that looked out of place on a low branch of a hemlock that juts into my backyard. Black-capped Chickadees, Tufted Titmice and White-breasted Nuthatches had launched an all-out assault on my feeders in the morning and never stopped as the sun continued to get higher in the sky.

Clearly this bird on the hemlock was not one of those three species. I had seen enough of those birds to be able to identify them in my sleep.

Obviously, the bird was a Dark-eyed Junco. It was an adult male as it was black on top and white on the bottom. Females and juveniles are duller gray or even brownish.

I love it when the juncos return to our area. Once they arrive, they can be quite numerous, depending on the year. Some years, nearly every time I pull into a parking lot I see about a dozen of them scatter like fireworks exploding from the ground up. Their small size and white-lined tails give away their identification.

Dark-eyed juncos are black (or gray)-and-white members of the sparrow family that suddenly become one of our area’s most common birds in the winter. They may be found in backyards, natural areas and, as I mentioned before, parking lots and roadways.

They are readily attracted to backyards with a bird food blend that features sunflower and smaller seeds. Although I’ve seen juncos on feeders, they are more likely to be found on the ground looking for seeds. I like to spread seeds throughout the yard and gardens and watch the juncos (and doves) move around the property picking up the freebies.

Be sure to watch the junco flocks carefully as every so often an albino or leucistic individual shows up.

There are six types of Dark-eyed Juncos, the “Slate-colored Junco” being the only one commonly seen in New England.

I particularly enjoy watching juncos on my deck following, or even during, snow storms. I make sure to throw new seeds out there every hour or so in order to keep some food visible above the accumulating snow. The juncos, often joined by White-throated Sparrows, hop along the snow seeking out the seeds, undaunted by the cold or snow.

Before the snow flies you can often find juncos in your yard picking seeds off the weeds that were never pulled during the growing season. Years ago I watched as a flock of juncos picked at the seeds of tufted knotweed in my backyard. I have since discovered that other birds like this pink-seeded weed as well.

See, I knew there was a reason I allowed so many weeds to grow freely.