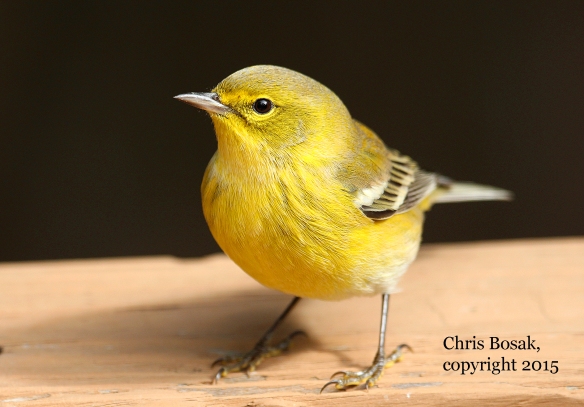 Photo by Chris Bosak
A Pine Warbler sits on a deck railing in New England this fall.

The birds are moving through, that’s for sure.

Mornings in New England are now filled with the songs of so many birds it’s hard to separate the voices. Throw in a mockingbird imitating the songs of several birds, and the confusion ratchets up a level.

A tufted titmouse (peter, peter, peter) broke the morning silence one morning this week for me; a robin (cheery up, cheery oh, cheery up) the next morning. I love mornings filled with birdsong.

Have you heard a bird trilling recently? A long series of quick, high-pitched notes often rings out throughout New England during the spring. But what is that triller?

Well, like many questions about birds, it depends. New England is home to several trillers; the most common being pine warbler, dark-eyed junco and chipping sparrow. They all sound similar — but different.

Pine warblers are one of New England’s earliest warblers. Throughout early and mid April — and sometimes a little later — pine warblers may be heard trilling from the tops of white pines. Pine warblers are dull-yellow birds and a most welcome sight and sound as they herald the beginning of the spring warbler season.

Dark-eyed juncos are the beloved black or gray and white birds that frequent the ground under our feeders during winter and early spring. They also trill, but I don’t often hear them sing.

Chipping sparrows are another triller, often singing from a high and obvious perch.

It was interesting to note that wave of activity. I believe they were migrating birds as they left the yard as quickly as they arrived. They could have been 50 miles — or even further — by the time morning came around.