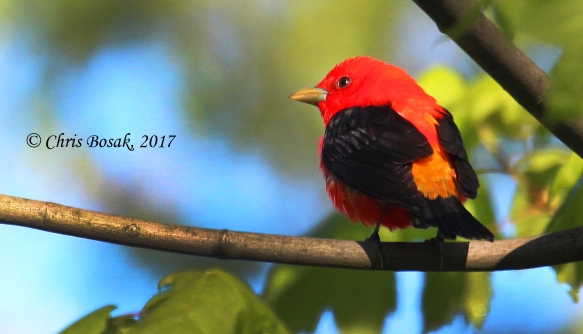 A male scarlet tanager perches in a maple tree during spring migration 2017, in Danbury, Conn.

I heard the uniquely odd call from the nearby woods.

“Chick burr. Chick burr.” The “chick” is higher and louder than the “burr.”

I rushed for my stepladder, set it up on my back deck and climbed onto the roof — camera in hand. It was something I did on a few occasions last year, which is how I learned that call so well.

It is one call of a scarlet tanager. It has a longer, more melodic song, but this particular call is a quick and unmistakable “chick burr.” It is distinctive; I know of no other bird noise like it.

But also those oaks that are so good at attracting birds with the plentiful worms and other insects among their leaves and branches. The larger dead branches also serve as homes for cavity-nesting birds. So, I will take the pollen and leaves in exchange for their bird friendliness. It’s a fair trade as far as I’m concerned.

The oaks seem to be a favorite of the scarlet tanagers that pass through in the spring and early summer. It is always a thrill when I hear that strange call because I know one of New England’s most brilliantly plumaged bird is nearby.

While warblers and vireos are often difficult to find in the canopy, the scarlet tanager’s electric red makes it a fairly easy target to spot. Then the trick becomes having the patience to wait until it lands within range of the camera lens.

Surprisingly, this time it didn’t take long. I spotted it almost immediately, a dot of red moving around the top of a leafed-out oak tree well out of camera range. It could have gone in any direction, but it came toward the house and even came down into a lower level of the woods. He posed for about three seconds, then disappeared into the woods.

I have had decent luck finding scarlet tanagers over the last couple years. I have gone entire spring migration seasons without seeing a single one, but for the last few years I’ve seen several and have gotten good looks at them.

Scarlet tanager is one of those birds that thrills beginning and grizzled veteran birders. I guess at this point I could be considered a veteran birder, but I am hardly grizzled. I appreciate all the birds I see, no matter how many times I’ve seen them before. And I certainly appreciate my scarlet tanager sightings.

Then again, who wouldn’t?