Photo by Chris Bosak
A female rose-breasted grosbeak visits a feeder in Danbury, Conn., during the spring of 2018. 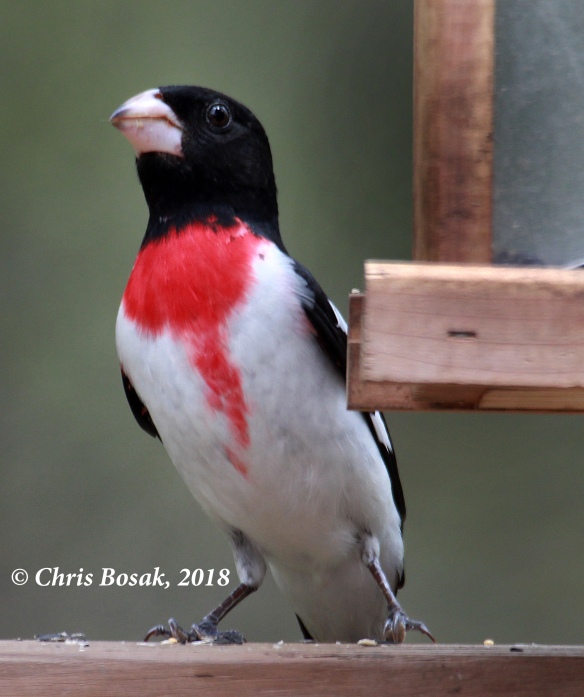 Photo by Chris Bosak A male rose-breasted grosbeak visits a feeder in Danbury, Conn., during the spring of 2018.

I heard its call and knew the indigo bunting was close.

Suddenly, it burst from the tall grasses and wildflowers and perched at the top of a blade of grass. The blade bent, but held the bird’s weight.

Once the bird settled, my first thought was “Oh, just the female.” The male indigo bunting is on many New England birdwatcher’s “most-wanted” list. Its brilliant blue plumage is one of the most inspiring sights in New England’s natural world. The female? Well, it’s brown and rather sparrow-like.

My attitude toward the female bunting changed quickly as I realized any indigo bunting sighting is worth celebrating, regardless of whether it’s a male or female. I snapped one photo before the female bunting left her perch and disappeared again into the tall grasses.

The indigo bunting is a prime example of sexual dimorphism. I’m usually not the type to throw out terms like that, but this one is worth knowing. Sexual dimorphism is the difference in appearance between males and females of the same species.

New England is filled with great examples, even among our common, year-round species. Cardinals are an obvious example. The males are brilliant red and females are a duller olive green or light brown.

Our most colorful songbirds, such as the scarlet tanager and rose-breasted grosbeak, are other fine examples. The females of both species are dull in color, while the males sport brilliantly colorful plumage.

I thoroughly enjoyed looking at the male and female rose-breasted grosbeaks at the feeder this spring and early summer.

Many female birds are duller, of course, so as to not attract attention, especially during nesting season. Let the males be the targets and keep predators away from the nest.

Other extreme cases may be found by looking at our water birds. The wood duck is about as colorful a bird as you can imagine. The male, that is. The female is muted browns and tans. Even the mallard, our most common and well-known duck, is an example with the shiny green head of the male and overall brown of the female.

Now, let’s look at some examples from the other side — the monomorphic birds. Male and female blue jays, for instance, have a similar appearance. The same goes for chickadees and mourning doves and many other common New England species.

Some species straddle the line and have less obvious differences. The male Baltimore oriole is a brilliant, vibrant orange, while the female is a duller orange. Male eastern towhees are black, white and rufous, while the females are similarly designed with brown instead of black plumage. The difference between sexes is even closer with the American robin, with the males having a slightly more polished coat.

Birds of prey are an interesting study in sexual dimorphism. In their case, the females are usually slightly larger. The bald eagle is an extreme case as the females can be up to 30 percent larger.

Sexual dimorphism is not exclusive to the bird world. Male deer and moose have antlers, females don’t. That’s one obvious example, but in most cases, male and female mammal species look pretty much alike.

Eventually, I found the male indigo bunting, too. He was keeping watch among the top branches of a nearby tree. While it was great to see the electric blue of its plumage, as I look back, I was just as happy to the see the muted brown of the female.