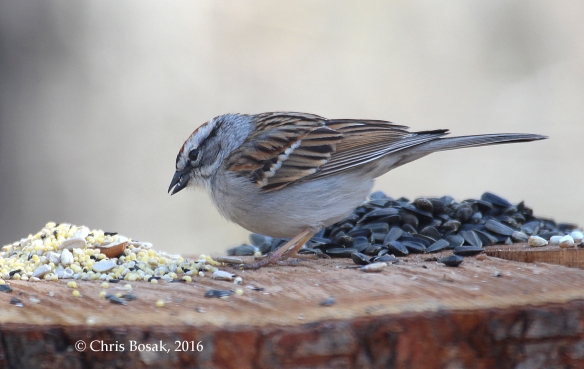 It’s been the year of the chipping sparrow in my yard. It started in the winter and hasn’t stopped yet.

Like most other birdwatchers, I had more than my fair share of dark-eyed juncos at my feeders this past winter. The other dominant species in winter is usually the white-throated sparrow, but this winter I didn’t see a single white-throat in the yard. I did see plenty of chipping sparrows, though.

When spring arrived, the juncos headed north to their breeding grounds and I haven’t seen one since. Chipping sparrows, on the other hand, have been a daily sighting from those snowy, winter days into spring and even early summer. I don’t think a day has gone by when I haven’t seen a chipping sparrow — and that’s a good thing, of course.

I have seen plenty of these tiny birds in the past, but I don’t remember seeing them in this number or frequency before. It has been a welcome revelation.

Chipping sparrows are small, handsome birds. They rank among the smallest in New England, in fact, outsizing hummingbirds and kinglets, but being comparable to warblers and juncos.

When the leaves start to fall in a few months (not that I’m rushing it), we may discover the nests used in the spring and summer by chipping sparrows. They are tiny structures built in the classic cup shape with material such as hair, mud, and straw. This year for the first time I filled a suet cage with dog hair to see if any birds would come for nesting material. The only taker I saw was a white-breasted nuthatch, but I would bet the chipping sparrows took some hair when I wasn’t looking.

Chipping sparrows are among the more vocal birds in my backyard, too. In the spring, its trilling was a daily auditory treat. Now that the babies have fledged, I hear the adults and youngsters calling constantly at the feeders. I always know when a chipping sparrow is coming to a feeder because it announces its arrival well ahead of time.

Chipping sparrows are, well, sparrow-like in appearance, measuring about five to five-and-a-half inches. They have whitish-gray bellies with classic sparrow-like brown and black backs. It has a black eye stripe, white eyebrow and chestnut cap.

When I feature a specific bird in a column like this I always like to throw in a fun fact about the bird in question. While reading about tanagers in “The Sibley Guide to Bird Life and Behavior,” I came across this gem about the chipping sparrow.

After Sibley writes about how male and female tanagers feeding their young, he adds: “There have been several cases of interspecific helping, in which male scarlet tanagers fed young chipping sparrows, at least until their own offspring hatched.”

Who knew? Imagine seeing that in your backyard.

As I said before, I’ve seen plenty of chipping sparrows, but I’m noticing them with greater abundance and frequency these days. It’s been an enlightening and welcome discovery.

1 thought on “For the Birds: A chipping sparrow kind of year”