Here is the latest For the Birds column …

During the first spring at my house three years ago, I noticed a bird going back and forth under my neighbor’s lofted porch.

Closer inspection confirmed my suspicion that an eastern phoebe had a nest there. The mud-and-moss nest was built on an old row boat oar that hadn’t been used or moved in many years.

OK, a flat surface under a protected area, I thought as I plotted to create my own phoebe nest habitat for subsequent springs. I rummaged through the basement and found a rectangular piece of wood, approximately 14 inches by 18 inches. I nailed the wood to some of the 2x8s beneath my own porch. Even if the phoebes don’t use it, surely a robin would, I thought.

Not so fast on the third spring. April and May yielded nothing, but in early June I walked past the platform and noticed a small mud-and-moss nest on the wood. It wasn’t built on the main part of the platform, but rather an excess corner of the wood that jutted beyond one of the 2x8s. My dad would have called the excess “slop” because of its shoddy craftsmanship. But, hey, I wasn’t shooting for perfection, just good enough so a bird could build a nest. Besides, the slop turned out to be a fortunate “mistake.”

As of this writing, the nest holds five eggs. It is likely a second or third brood for this phoebe as they are one of the first birds to arrive in spring — usually by the middle of March.

But the news isn’t all good. Only four of the eggs are white phoebe eggs. A darker, mottled egg of a brown-headed cowbird is also in the nest.

Brown-headed cowbirds are brood parasites and lay their eggs in the nests of other birds, leaving the parental duties to the host bird. Phoebes are a common victim, as are other small birds such as warblers and sparrows. Brown-headed cowbird eggs typically hatch earlier than the other eggs and the baby cowbird grows at a faster rate. This makes the host bird work overtime to raise the cowbird, often at the expense of the other young birds.

Cowbirds do this because of their notorious nomadic nature.

So, just remove the cowbird egg, right? Not necessarily. The female cowbird monitors the nest and may destroy the nest altogether if the cowbird egg is disturbed — either by the host bird or human intervention.

An article I found on audubon.org brings up other legal and ethical questions. It used to be common practice to vilify cowbirds and everything they stood for. The no-good, lazy birds are destroying other birds and should be destroyed, was a common line of thinking — and still is for many people, I’m sure.

The Audubon article, written in 2018 by Amy Lewis, states that people shouldn’t interfere with nests that have cowbirds eggs. Firstly, it is illegal as per the Migratory Bird Treaty Act as cowbirds are native to the U.S. Though, technically, it is illegal to pick up a blue jay feather found on the ground, but not many people I know would hesitate to grab the feather.

The article, quoting several sources, also states that it is best to let nature take its course. Human feelings and morals should not interfere with something that has been going on in nature for hundreds of years. 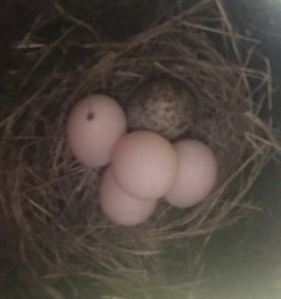 It’s funny how research and science can change public opinion over time. Ten years ago I couldn’t imagine writing a bird column saying to leave cowbird eggs alone. I’m still somewhat on the fence about the whole thing as I imagine the phoebe under my porch working her tail off to raise a cowbird with possible grave consequences for her own babies.

But I will not interfere. I will watch the nest daily and see what happens. The first phoebe egg was laid on Tuesday, June 11. Another phoebe egg and the cowbird egg appeared on June 12. The phoebe laid another egg on Thursday and another on Friday. Photos of the eggs and nest may be found at www.birdsofnewengland.com.

That’s where we stand as of now. I’ll keep you posted.

Update: As of Friday, June 21, the nest remains with four phoebe eggs and one cowbird egg.

2 thoughts on “For the Birds: Phoebe and cowbird eggs”