Relatively easy one today. Here’s a big hint too … what is showing in the photo is not often seen but is part of the bird’s name. Thanks for playing along.

Here’s yesterday’s answer, and yes, someone got it right, so you’re 2-for-2 so far.

Here’s a few frames prior …

Those who guessed black-capped chickadee were right!

I’m going to shift themes again. I’ve already covered social distancing and cleanliness, now I will tackle the uncertainty aspect of coronavirus. I am not using coronavirus as an overarching theme to make light of this crisis,   but rather to highlight the indomitable human spirit and bring a bit of levity to these trying days.

Therefore, with this post I kick off a run of Birding Quiz posts. I’ll reveal the answers in the next day’s post. Thanks for playing along and for supporting BirdsofNewEngland.com.

The first question is: What is in the above photo?

I saw my first hummingbird of the year about 10 days ago. It paid my feeder a quick visit in the morning and I never saw it again. He must have been on his way northward and stopped for a quick pitstop. But now, the hummingbirds are back for real. A male has been visiting my feeder about every 20 minutes for the last three days. A few times it had to fight off a few rivals to keep its territory. Hummingbirds are small and cute, but fiercely territorial.

Here’s a shot a took over weekend. Welcome back. 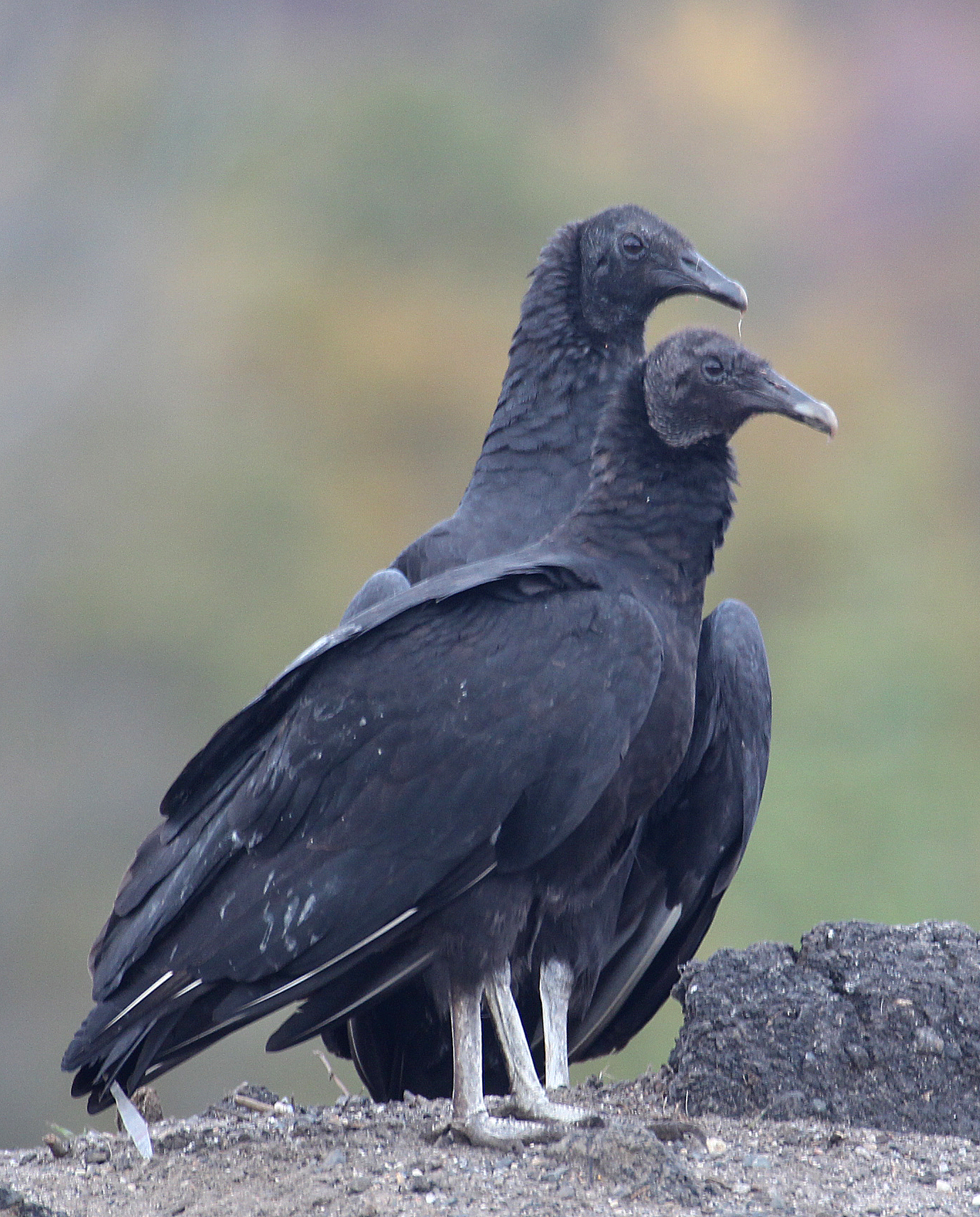 Here is the final photo in my celebration of Vulture Week, a week I totally made up because I had some vulture photos to share. This is a pair of black vultures, which are becoming more common in New England.

Final vulture fun fact: Vultures do not circle their prey, a misconception reinforced by so many Western movies. They do circle, but they do that whether there is prey below or not. If they find prey, they get to it quickly.

As a bonus, check out the Reader Submitted Photos page for a new photo of a soaring turkey vulture. 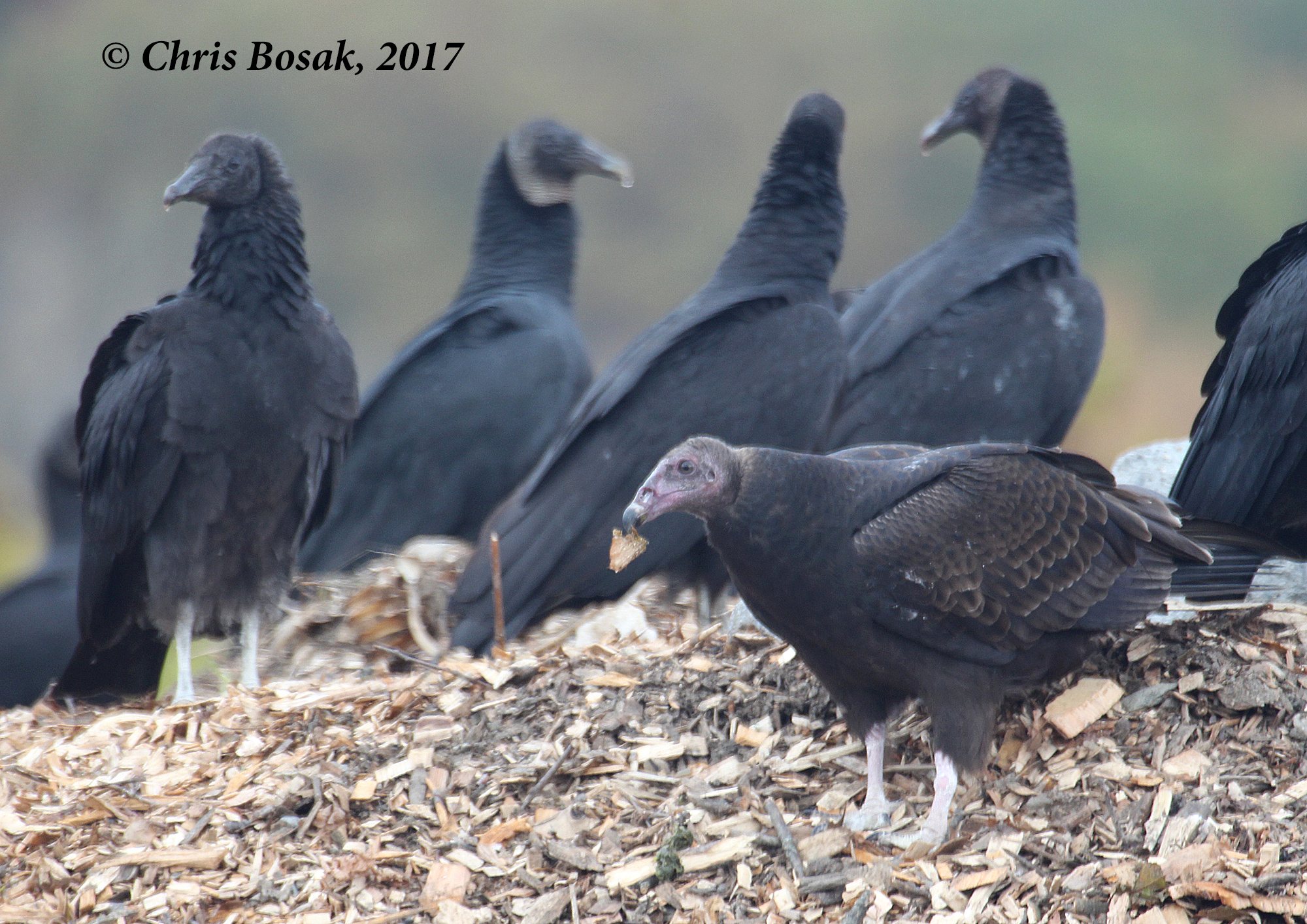 Photo by Chris Bosak
Vultures sit on a hill in Danbury, Conn., fall 2017.

Here’s a young turkey vulture with a wood chip in its mouth (for whatever reason) as a bunch of black vultures gather behind.

Taken from Wikipedia, so it can’t be wrong. Right?

Photo by Chris Bosak
A pileated woodpecker looks for insects at the base of a tree at Merganser Lake in Danbury, Conn., April 2017.

Here’s another photo of the pileated woodpecker I saw the other day.

Hearing the name of this remarkable bird begs the question: What does pileated mean? According to dictionary.com, it simply means “crested,” an apt name for this woodpecker. There’s also this, more descriptive, definition from thefreedictionary.com: “Etymologically means “capped,” like a mushroom, but now refers to a bird with a crest on the top of the head from the bill to the nape.”

So there you have it … 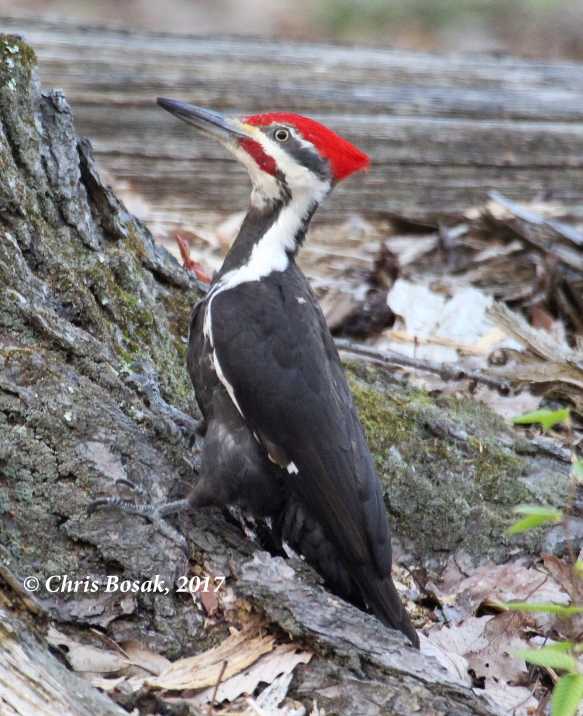 Photo by Chris Bosak A pileated woodpecker looks for insects at the base of a tree at Merganser Lake in Danbury, Conn., April 2017.

It took going on two years, but I finally got a shot of one of the pileated woodpeckers that I hear frequently in the woods behind my house. I’ve seen them before, but only at a distance and only fleeting looks.

I wondered when I’d see one working away at the multitude of dead pines in the woods. There are dozens upon dozens of these snags and they all have big holes chiseled out of them — a telltale sign of pileated woodpeckers. Yesterday was my day. The impressive bird was noisy in its calling and noisy in its banging away at the tree. It’s amazing the force at which they hammer at trees.

This guy (it is a male as females lack the red “mustache”) remained only about five minutes before heading deeper into the woods, calling as it flew.

Check out this video