Armed with only my phone camera on a meadow walk with Savanna this morning, we came across this banded hairstreak, a tiny and handsome butterfly of New England.

Two weeks ago I walked this same meadow on a 90-degree, humid day and butterflies were literally everywhere. This morning was cool with a hint of fall in the air and goldenrod taking over as the dominant flower species. There were plenty of butterflies to be seen but not nearly in the same numbers. A beautiful and satisfying meadow walk just the same. 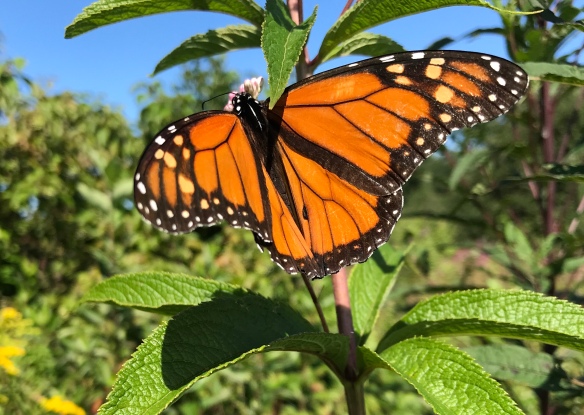 Look back at my “Butterfly Weekend” posts from last week and check out the vast majority of butterfly photos published elsewhere and tell me how many wings a butterfly has. From most photos, it appears as if butterflies have two wings, just like birds.

But butterflies, of course, have four wings, even though it is rarely apparent by watching them fly or sip nectar from a flower. Each wing we see is really two wings: a hindwing and forewing.

I was lucky enough to catch this shot of an eastern tiger swallowtail, which clearly shows the four wings of a butterfly. Nature never fails to astound.

Here’s the same butterfly as it’s usually seen and photographed:

Here is more information on butterfly wings, compliments of enchantedlearning.com

Birds were scarce on the walks, as they usually are on hot summer afternoons. In what has become somewhat of an annual event for me, I picked a blisteringly hot and soakingly humid summer afternoon and went to a New England meadow to see what critters were flying, jumping and crawling about.

Butterflies were the main attraction, as they usually are, followed closely by dragonflies. Monarchs were the dominant butterfly species, but eastern tiger swallowtails were in abundance as well. There were also high numbers of black swallowtails, skippers, buckeyes, sulfurs and other delicate winged beauties.

It was nice to see so many monarchs, of course, as this iconic species is in serious decline and in recent memory was thought to perhaps be going extinct. From what I have read, the 2019 population is well above the previous year, which is terrific news. It is not time to let down our guard, however. Populations of animal species can vary widely from year to year and we want to make sure we keep doing all we can to help monarchs survive.

The meadow in which I walked is teeming with milkweed. That, of course, is the main food source for monarch caterpillars, but also a favorite nectar stop for adult monarchs and other butterfly species. I would say at least 80 percent of the butterflies I saw feeding during my walks were sipping from milkweed flowers.

Yes, the butterfly season is definitely in full swing. It will remain that way for the next several weeks before tapering off as we head into fall. I will return frequently to this and other meadows to see the butterflies and other critters getting ready for the colder months.

As I mentioned, the bird activity on these walks was rather slow, but not nonexistent. I did notice a rather large flock of bobolinks, a mixed flock of males, females and youngsters, flying around, which was nice to see.

I also saw a few immature bluebirds with their dull plumage and spotted chests. Goldfinches were a frequent sighting, and without a doubt, the most numerous bird I saw. Besides that, a song sparrow or two and the odd hawk flyover were about it for bird activity.

These sweltering strolls into the meadows each summer have become one of my favorite annual traditions. I’m certainly not saying butterfly photography is easy, but they are certainly more cooperative than most birds. Plus, the colors you get on the photos from the butterflies and flowers are always inspiring.

Many more photos of the walk are available on the website www.birdsofnewengland.com. Feel free to check it out and also remember to send me your most recent sightings, be it birds, butterflies, or whatever else you have seen in the natural world.