I never met Bill Silliker Jr., but I am a fan of his work. He was a nature photographer who passed away in 2003. He was based in Maine, and his specialty was moose. His work graced calendars, magazines, books, you name it. The other day I pulled his book “Moose — Giant of the Northern Forest” off the shelf. He wrote it in 1998 and it is, of course, richly illustrated with his fantastic moose photos.

Again, I never met Mr. Silliker, but his writing comes across as down-to-earth, compassionate and deeply caring about the animals he photographed. The book’s chapters discuss various aspects of moose: history, behavior, rut, etc. At the end of the book, he discusses the many threats to moose. Among them are car and train accidents, predation by bear and wolves (Alaska and western U.S.), and humans by way of pollution and habitat destruction.

He also notes that brainworm “may be the most serious health hazard moose face in regions where their range overlaps with that of the parasite’s carrier, the white-tailed deer.” That concern is indeed playing out, particularly in southern New England, where brainworm is thought to be the chief enemy of the moose population, according to biologists in the region.

Mr. Siliker also writes that tick infestations “sometimes play a role in depleting the health and resistance of moose.” Fast forward 20 years from the book’s publishing and ticks have END_OF_DOCUMENT_TOKEN_TO_BE_REPLACED

It’s going on 30 years that I have been making frequent trips to the northern tip of New Hampshire to look for moose and other wildlife. Thirty years? Hard to believe.

I’ve seen a lot of changes in the Great North Woods over the decades, some positive and some negative. Granted, the trips have become less frequent lately, but I still try to make it up at least once a year.

A positive I have noticed is an increase in loon and bald eagle sightings. Both those species have bounced back from low population numbers and now seem to be doing much better. That is thanks in large part to groups like the Loon Preservation Committee, which END_OF_DOCUMENT_TOKEN_TO_BE_REPLACED

People come to the North Country for a lot of reasons: fishing, hunting, endless ATV and snowmobile trails, wildlife watching, etc. Those who are here wildlife watching (and I think I can speak for many people) have moose as their primary target. Unfortunately, the moose population throughout New England has declined dramatically over the last several years. Biologists blame most of the decline on winter ticks, which are thriving in the warmer winters and wreaking havoc on moose.

A fair number of moose remain, which is the good news, but the decline makes it that much harder to find them. Driving along Route 3 in Pittsburg, N.H., for instance, used to be a guarantee for moose sightings. Cars would line up in the evening around the salt licks and wait for the moose to show up. The salt licks are no longer and the remaining moose are scattered throughout the vast forest. It now takes a lot more skill, knowledge and luck to find a moose in northern New Hampshire. Mostly luck.

I was lucky and fortunate enough the other morning to find a moose — three moose, actually, as it was a cow with twin calves. I launched the canoe on a popular pond (fen, really) in Pittsburg, N.H, Monday morning, waited out a heavy rainfall under the cover of evergreens, relaunched after the rain, paddled around a corner and saw the three moose. They were the first moose I had seen in years and I stopped the canoe a good distance from them and admired the scene. I was beyond thrilled to see the moose, of course, but I was equally happy to see the twins. I hope they both grow up to be healthy adults and do not succumb to winter ticks like so many other moose. I hope they are a sign that things are turning around for New England’s moose population. That’s probably being naive, but I can always hope.

That’s been my only moose sighting on this trip north so far. I’ll keep searching. 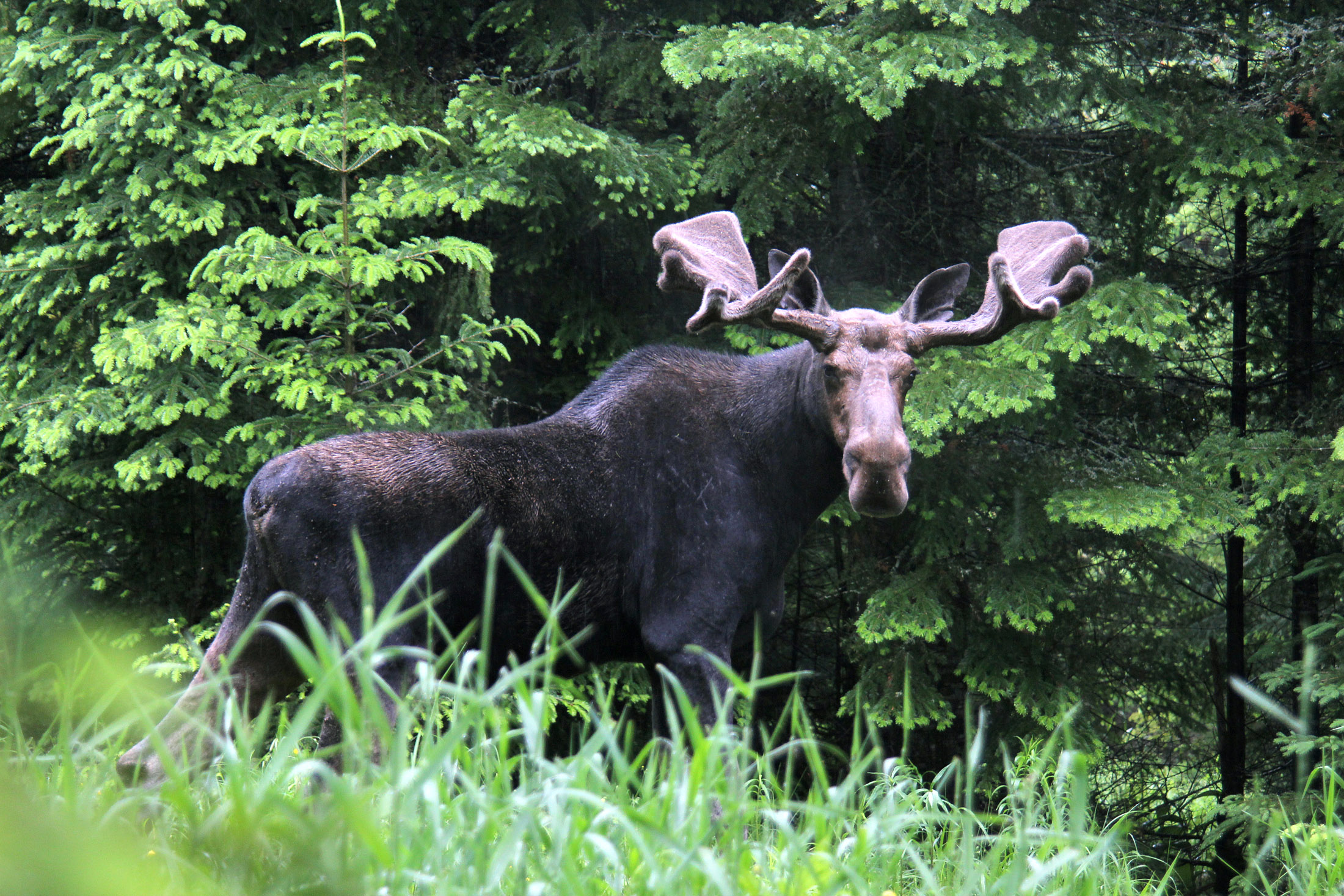 I would never turn down the opportunity to write a story about New England moose, even if the subject is a bit somber. So when The Keene Sentinel asked if I would do an update story on the moose’s decline, I happily obliged.

Click here for the story, which appeared in today’s Sentinel.