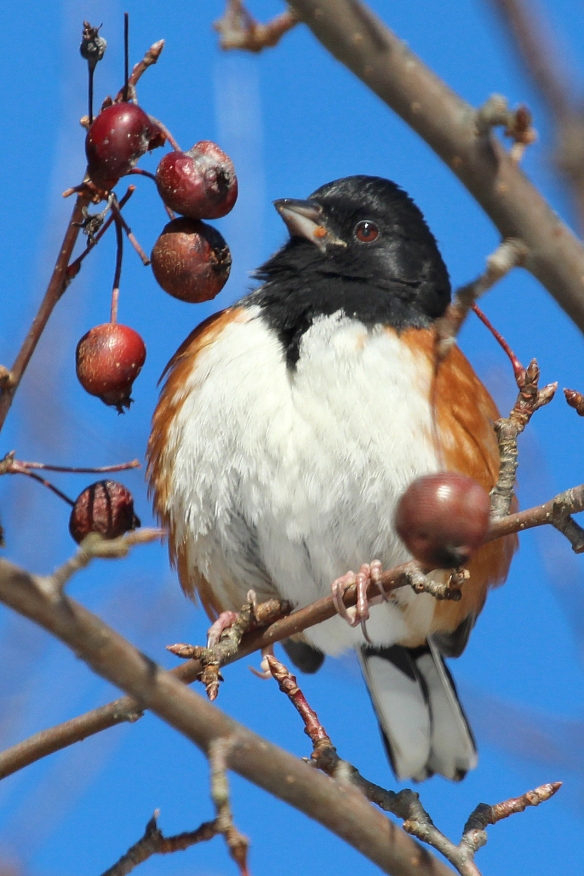 Photo by Chris Bosak
An Eastern Towhee eats a crab apple during a cold winter day at Weed Beach in Darien, CT., Jan. 2014.

I’m far from a landscaping expert. Anyone who has seen my jungle of a garden in the summer can attest to that. But I do know that using native trees, shrubs, bushes and flowers are the way to go.

Whether they are planted with the intent to attract birds or not, using plantings that are native to your area reduces the risk of potentially using an invasive exotic species that will eventually overtake native species. It also is better for the native insect population because in many cases the insects can not feed off the non-native plants, thereby reducing the number of insects that serve as valuable food for birds. Reducing the number of insects may sound like a good thing at first, but we’re not talking about pest insects such as mosquitoes, we’re talking about insects that you probably never see, but have high value to birds.

There are a million other reasons to use native plantings and a million great options for doing so. Again, I’m not a landscaping expect, but a simple internet search of “planting native species [enter your state here]” will lead you in the right direction.

Quickly though, here are a few suggestions of native plants that have worked well for me – coneflower [great for goldfinches and other small birds], black-eyed susan, crab apple, sunflowers, and bee balm.

Feel free to comment below to say which native plants work well for you in regards to attracting birds.