Last week brought frozen temperatures back to southern New England. The birdbath was mostly frozen but a few industrious birds found the right spots to get a drink. Here’s a male eastern bluebird.

(Repeat text from yesterday) With many of us working from home or otherwise “physical distancing” as we combat COVID-19, I will post series of photos that are at least vaguely related to our dealing with the crisis. I’ve already done commingling species as a nod to social distancing. This week’s theme is birdbaths to highlight the need for hand washing. (Even though most birds in this series will be drinking and not bathing.)

There will be more on this coming next week when the next For the Birds column is posted here, but here’s a teaser photo to get you through a weekend of isolation. Moral of the story in short: offer water to the birds too.

Here is the latest For the Birds column, which runs weekly in several New England newspaper.

I would imagine no apology is necessary, however, as who doesn’t like to hear, read and talk about bluebirds?

I walked into my sunroom and saw through the window just a flash of a bird out of the corner of my eye. The bird had been perched on one of the arms of the feeder pole system and disappeared into woods behind my house.

That was a bluebird, I know it, I told myself, even though I got only the shortest of looks in my peripheral END_OF_DOCUMENT_TOKEN_TO_BE_REPLACED

After several weeks of writing about eastern bluebirds that other people have seen, I finally got a few of my own this weekend. I caught a glimpse of one flying away from my feeding station that includes suet, sunflower seeds and Nyjer seed. My guess is that the bird flew away disappointed as mealworms are their favorite food (at least in terms of backyard feeding.) So, of course, I rushed out there with a handful of mealworms and spread them out on the deck railing. Within half an hour a male and female bluebird were enjoying the dried morsels.

More on this to come! In the meantime, here are a few more shots. Also, feel free to look back on some past posts on this site to see how this has become the Winter of the Bluebird in New England.

Last year was the winter of the barred owl. As you recall, barred owls were being seen in great numbers all throughout New England. Experts had conflicting theories on why so many of these beautiful owls were being seen, but there is no denying that more than usual were found. On one trip to visit my brother in upstate New York, I found two barred owls. The second owl was perched atop a Welcome to New York sign on the Vermont border.

Several years ago, Christmas Bird Count results were teeming with huge dark-eyed junco numbers. Whereas there are usually hundreds of juncos in a particular count area, there were thousands that year. I dubbed it the winter of the junco and have been on the lookout for similar anecdotal phenomena since then.

Who can forget the winter of the snowy owl a few years back? I can recall robins and pine siskins being highlighted in previous winters.

As I drive to work every day, one stretch of a particular road often has a large flock of juncos. They scatter as I drive by; their white-outlined tails giving away their i END_OF_DOCUMENT_TOKEN_TO_BE_REPLACED 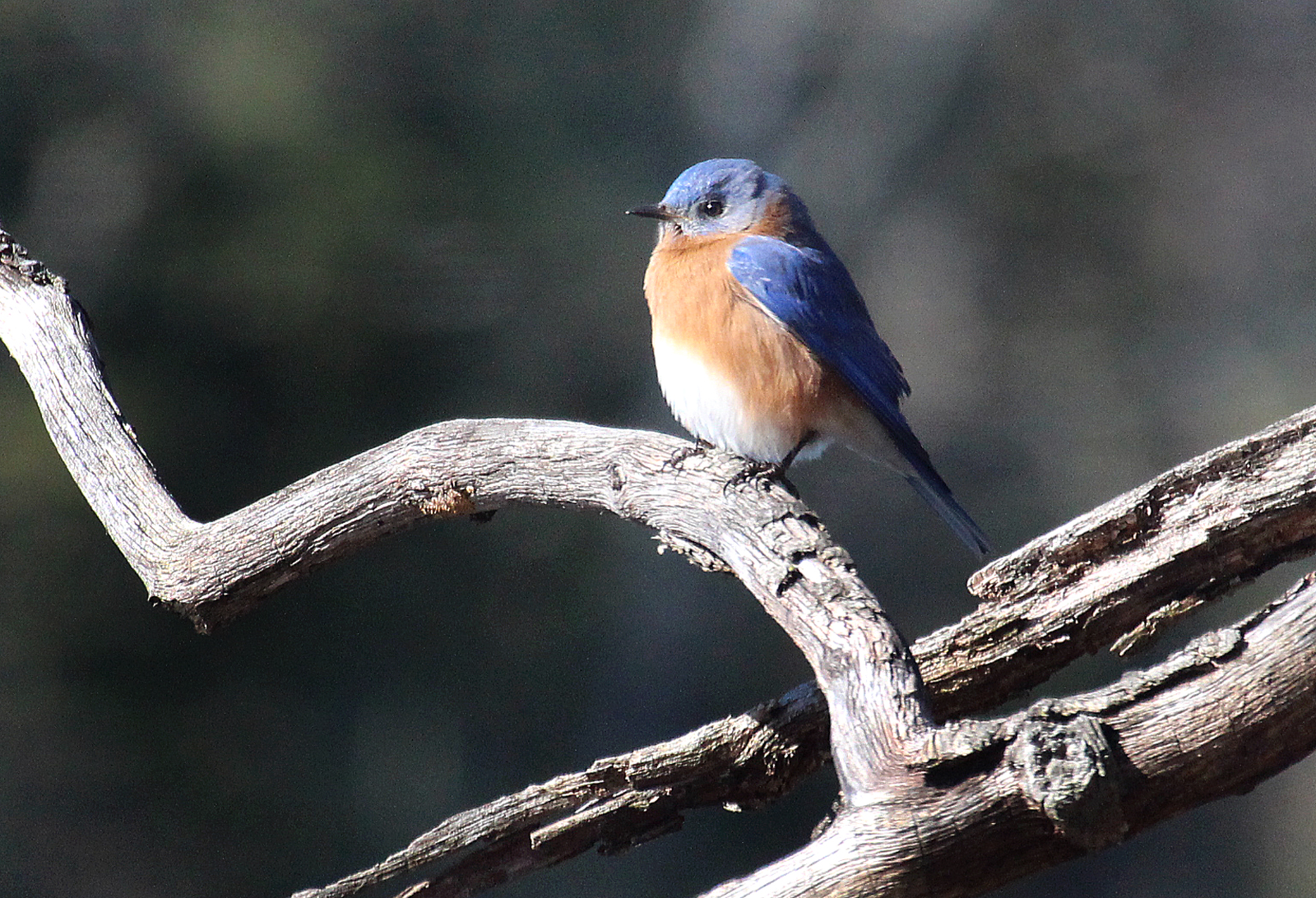 Photo by Chris Bosak
An Eastern Bluebird perches near a lake in Danbury, Conn., Feb. 2016.

Eastern Bluebirds, similar to American Robins, are thought of as mostly a spring and summer bird in New England. I love finding an active bluebird box in April or May and watching the parents go back and forth feeding the youngsters hidden inside the box.

But Eastern Bluebirds are also commonly found in New England during the winter. I love seeing them after a snowfall; how their bright blue and orange seem even brighter against the white backdrop. Bluebird END_OF_DOCUMENT_TOKEN_TO_BE_REPLACED

Elena from Winchester, N.H., got this shot of Eastern Bluebirds at her warm-water birdbath during the cold snap of Feb. 2015.

Here’s my For the Birds column from last week. Since I wrote it I have received a few more emails from readers who have seen bluebirds this winter. In fact, one reader wrote to say he saw seven Eastern Bluebirds pile into a single birdhouse to stay warm. (Note, the above photo was taken by a reader from New Hampshire).

It seems that every winter has its bird. Last year, of course, it was the Snowy Owl. A few years ago it was the Common Redpoll and, before that, the Pine Siskin.

Every year it seems a certain species of bird “irrupts” into New England and sets the birding world abuzz. An irruption is when birds come to a region in large numbers, presumably because their food source is scarce on their typical wintering grounds. The term usually refers to northern birds, especially finches, coming south for the winter.

I can remember a winter when the Dark-eyed Junco was bird of winter. We see them every winter in New England, but during this particula END_OF_DOCUMENT_TOKEN_TO_BE_REPLACED