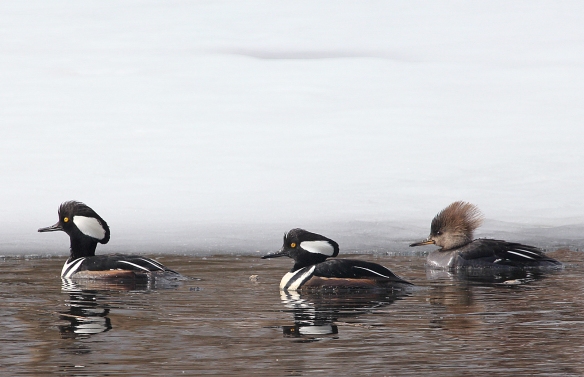 Photo by Chris Bosak
Hooded Mergansers swim in a small unfrozen section of water at Selleck’s/Dunlap in Darien, Conn., in Feb. 2014.

For me, “duck season” starts with the first sighting of something other than a mallard, wood duck or black duck.

This year it started in late August when I saw a lone hooded merganser in the small pond at the end of the trail that runs through my backyard. I’m not sure if it was an early migrating duck or if its territory is nearby, but it certainly marked an early start to duck watching season for me.

Of course, several weeks passed before my next duck sighting, but now it appears that duck season is finally here for real. The weather certainly is fitting for duck season. The other day, I stood on the shores of a lake watching a flock of common mergansers. The temperature was in the low 30s and a whipping, cold wind stung my ears. In other words, things could have been worse.

The “typical” start to duck-watching season goes something like this: The leaves change colors and a few hooded mergansers and ring-necked ducks show up on area lakes and ponds. Large flocks of common mergansers congregate on larger lakes and reservoirs.

As the season progresses, small ponds attract goodies such as green-winged teal, gadwall and American wigeon. Larger lakes attract more and more common mergansers as well as bufflehead and a goldeneye or two.

Long Island Sound and the Atlantic Ocean follow a somewhat predictable schedule as well, with brant showing up rather early, followed by beauties such as common and red-throated loons, grebes, goldeneye, long-tailed ducks, red-breasted mergansers and scaup. Eider are common on the ocean, but not so much on the Sound.

END_OF_DOCUMENT_TOKEN_TO_BE_REPLACED 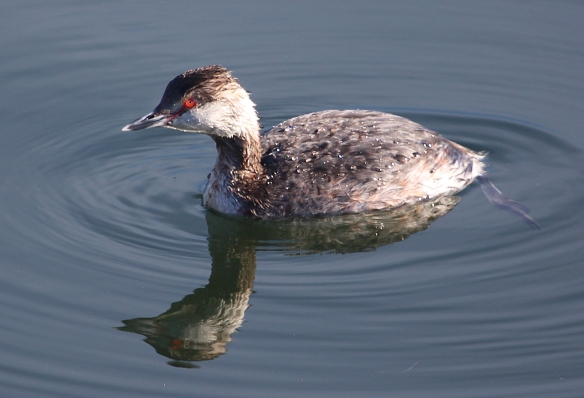 While watching a small flock of Ruddy Ducks at Cove Island Park in Stamford, CT, a Horned Grebe made an appearance. The grebe was in a transitional plumage and will look quite different a few weeks from now.

Most of our “winter ducks” have flown north already, but some still linger. The Ruddy Ducks were a good sighting and there are still several Red-breasted Mergansers around. Soon, It will be mallards and black ducks for southern New England.

The Ruddy Duck photos are below:

END_OF_DOCUMENT_TOKEN_TO_BE_REPLACED 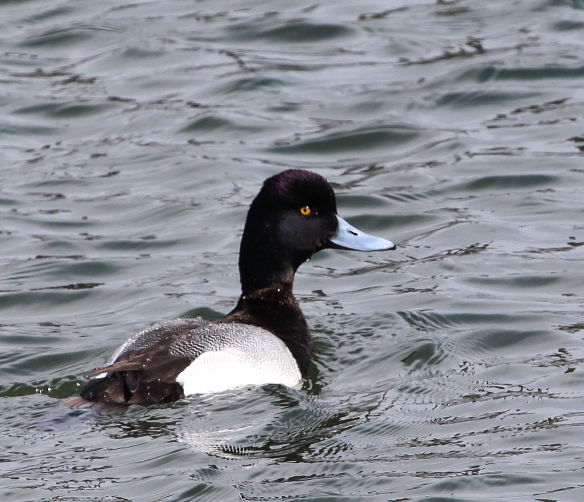 April, for me anyway, is a bittersweet month for birdwatching. I love watching ducks, so the period from when the “winter ducks” arrive in fall to the time they depart in the spring is perhaps my favorite time of year for birdwatching. Well, that time in spring is approaching. The ducks _ other than mallards and a few others _ will soon depart southern New England for their breeding grounds up north.

The flip side of that, of course, is that the songbirds, shorebirds, birds of prey and other spring migrants will be here soon (if they haven’t arrived already.)

I’ve been seeing fewer and fewer ducks at my normal haunting grounds over the last week or so. Remember my post last week when a Redhead shared a pond with Hooded Mergansers, Ring-necked Ducks and Wood Ducks? Well, that pond is now vacant. No winter ducks or any other ducks for that matter. I’m sure the mallards and hopefully some Wood Ducks will return. But the other ducks will likely not be seen there for another seven or eight months.

Long Island Sound and its harbors are slowing down, too, but not shutting down. I saw a few Long-tailed Ducks, Bufflehead, Red-breasted Mergansers and Greater Scaup on a recent visit to Norwalk Harbor _ but not in the numbers that I saw them just a few weeks ago. In a few more weeks, only a few straglers will be left _ until next fall, that is. 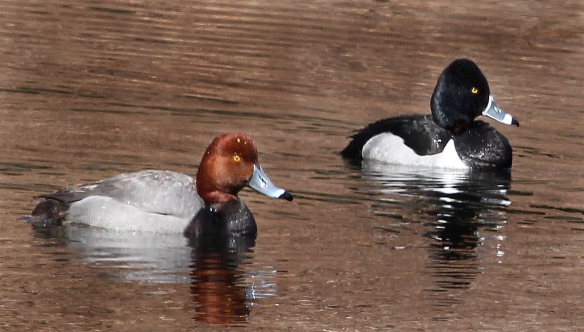 Photo by Chris Bosak
A Redhead swims alongside a Ring-necked Duck in Darien in March 2014.

At one point or another, I saw the Redhead “cross paths” with each of the other kinds of ducks. With one exception, the other ducks and geese basically paid no attention to the Redhead. In fact, at one point it was diving among a small flock of Canada Geese. It resurfaced next to a different goose every time and none of the geese seemed to mind.

It hung around the Ring-necked Ducks quite a bit and my suspicion is that it arrived with those ducks and will likely depart with them as well. Just a guess.

Five Hooded Mergansers passed the Redhead at one point with no drama. 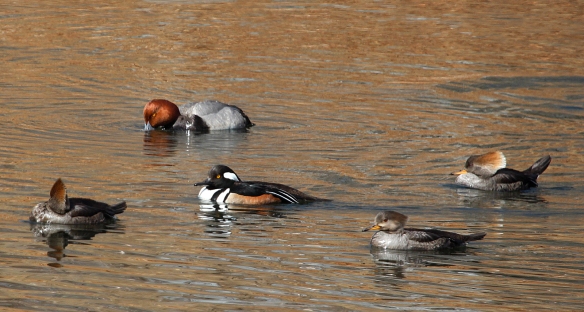 Photo by Chris Bosak
A flock of Hooded Mergansers swims past a Redhead at a Darien pond in March 2014. 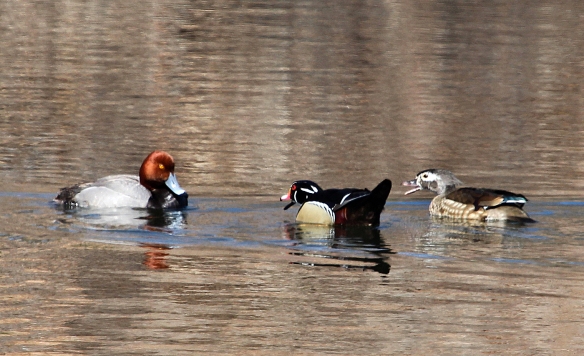 Photo by Chris Bosak
A pair of Wood Ducks show their displeasure with a nearby Redhead in Darien in March 2014. 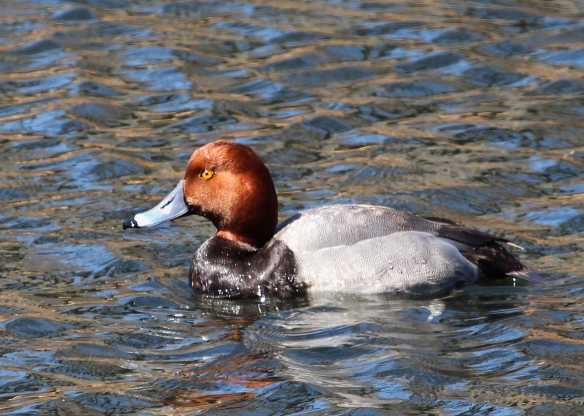 I drove past the pond at first, assuming nothing of note would be there. But that nagging voice in the back of my head said: “Go back and check. It’ll take five minutes and you’re right here anyway.” I listened to that voice, as I usually do, and it paid off, as it often does. 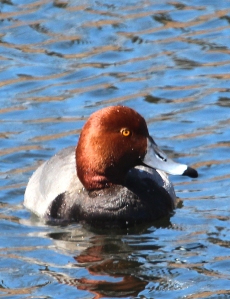 Photo by Chris Bosak
A Redhead swims at a pond in Darien in March 2014.

The pond at Spring Grove Cemetery in Darien is small but often fairly productive. It’s a good place to see Wood Ducks in the fall and spring. Hooded Mergansers are frequent visitors in winter when the water isn’t frozen over. Ring-necked Ducks are occasional visitors. And, of course, Canada Geese and Mallards are usually there.

But one day this week, not only were Hooded Mergansers, Wood Ducks and Ring-necked Ducks all there, but a surprise visitor was there as well. Redheads are a beautiful medium-sized duck that are seen occasionally in New England. I’ve seen massive flocks of them in the Midwest, but only a handful of times have I seen them in New England. They are seen sometimes within huge flocks of scaup. But I’ve never seen one in New England at a pond as small as this one. It was interesting to see it among the mergansers and ring-neckeds.

This is a male Redhead. The female is much duller in color, mostly tannish brown.

In a post later this week I’ll let you know how the Redhead seemed to get along with the other ducks in the small pond.

Photo by Chris Bosak
A Redhead seen in Darien in March 2014. 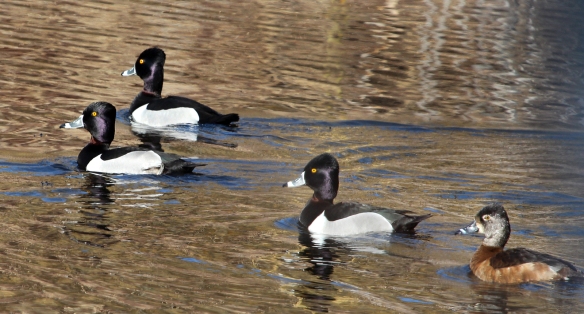 In my last post about getting out there to check out the ducks before they are gone for the summer, I listed a bunch of ducks that winter throughout New England, but breed farther north. I left off that list Ring-necked Duck. It just didn’t come to mind when I was compiling the list. Sure enough, the next day I went out for a quick bird walk and the only ducks I saw were Ring-necked Ducks. I immediately thought: Hey, I don’t think I mentioned Ring-necked Ducks in that last post.

So, finally getting its due, here you have the Ring-necked Duck, a very handsome duck that spends its winters here in New England (and well south, too) and breeds in northern New England and into Canada. As you can see from the photo, a more apt name might be Ring-billed Duck, but the scientists who named it likely had a dead specimen in hand and the ring around its neck — which is difficult to see in the field — was more visible. It took me years to stop calling it Ring-billed Duck, but I eventually got used to it. 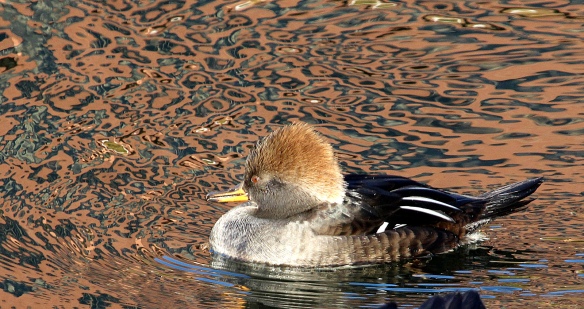 Our winter ducks will remain with us for only a few more weeks so be sure to check out your local watering holes for these birds before they are gone.
Some ducks, of course, will remain with us all summer and breed locally, but most of the ducks we have on our waters now will head far north of here shortly. Depending on what part of New England we are talking about, Mallards may be the only duck we see in the summer – with perhaps the occasional tucked away pond holding Wood Ducks. The farther north you go in New England the more duck species there will be.
So get out there and enjoy the mergansers, scaup, grebes, teal, Long-tailed Ducks, Buffleheads and Goldeneye while you can. We won’t see them again until the fall.

Over the years I’ve taken tons of Hooded Merganser photos. I just love those little ducks and find them infinitely interesting.

So this weekend, what did I do? I took more Hooded Merganser photos, of course. About five males and four females were utilizing a small pool of unfrozen water on an otherwise frozen lake at Sellecks/Dunlap Woods in Darien, Conn. The males were not displaying, but that time is coming soon. (A video I took last winter of their breeding display behavior is included at the bottom of this post.)

Here are the latest. (Remember, you can always send me your bird photos and I’ll include them on my “Reader Submitted Photos” page. Send me your photos at bozclark@earthlink.net.

Now for those hoodies:

Photo by Chris Bosak
Hooded Mergansers swim in a small unfrozen section of water at Selleck’s/Dunlap in Darien, Conn., in Feb. 2014.

Photo by Chris Bosak
A Hooded Merganser swim in a small unfrozen section of water at Selleck’s/Dunlap in Darien, Conn., in Feb. 2014.